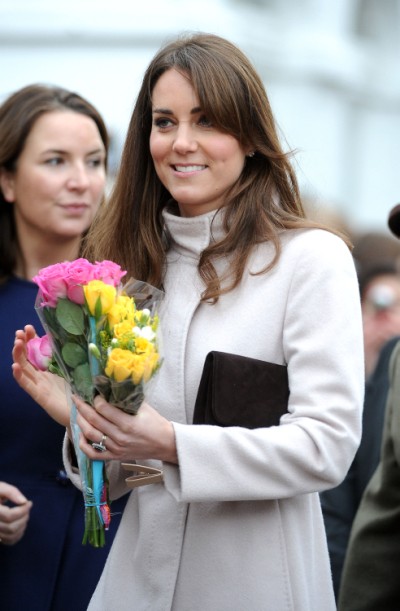 Oh, the old wives and Jessica Hay are circling and I feel like I know so much about this blessed child already! According to the big-mouthed best friend, Kate Middleton’s expecting a baby girl and Diana has always been one of her favorite names! Well, how convenient! I couldn’t write this pregnancy out any better if I tried!

Jessica also told Australian magazine, New Idea, that twins aren’t such a far off possibility: “Catherine would love twins and a lot of people in their circle in London say it could indeed be the case that she is expecting twins. If it were a boy and a girl, it would be a dream come true for them both.”

Well of course it would! She’s only have to get pregnant once! But I can’t believe this girl could be that lucky. That’s just not fair.

And before you shake your head at more of Jessica’s accurate nonsense, the Daily Mail also had a story today about the high likelihood of a baby girl. Kate Middleton’s weight and sickness as well as Prince William’s profession seem to guarantee a pink baby’s room. Apparently women experiencing hyperemesis gravidarum tend to have more girls as well as women with a low daily caloric intake. And William isn’t helping things either by being a helicopter pilot. An American study found that pilots have an 80% chance of having girls because some believe the exposure to radiation on planes reduces the number of sperm carrying male chromosomes. That interesting, no? Or am I just a nerd?

Anyway so let’s start the baby naming game! Everyone thinks Diana is the front runner. I’m leaning there especially since Jessica mentioned it but it’s also rumored that Victoria is a favorite as well. I actually think that has a better chance. Diana is just too obvious and a little weird, right? That  name will definitely be there but maybe not first in the line up.

What do you want to see Kate and William name their first baby? Is Diana too morbid or would it be a fitting tribute?