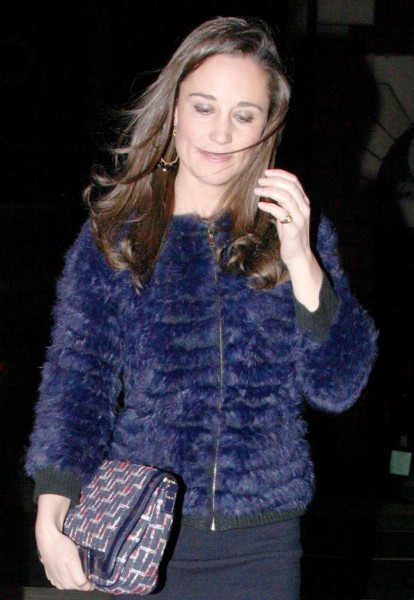 So was Jessica Hay told about Kate Middleton’s pregnancy and Christmas announcement or is she just really, really good at guessing? She’s not much different than the tabloids and all their “Kate’s pregnant!” headlines. If you use that cover every other week one of them was bound to get it right sooner or later. The only thing that makes me scratch my head over the validity is the Christmas part. Did someone tip Jessica off or did she just recognize Kate’s growing cheeks faster than the rest of us?

So we’re getting the news that Kate might only be six weeks along and probably found out around 4 weeks since you know she probably had a pregnancy test ready for years. Two weeks ago was about the time that Jessica went to the Australian publication with her story. This is all looking more and more likely to me. Who would Kate have told? Her mother and Pippa, right? I can’t imagine she would have rung up friends partially because she doesn’t have any and also because you’re really not supposed to that early. Then she was busy with engagements last week. So could Carole Middleton or Pippa have spilled the beans? My mom is really bad about things like that. You have to look her in the eyes and plead with her not to tell anyone what you just told her and even then you still know it’s going to happen. It’s not a question of if but when. Was that the case with Pippa? Pippa’ has friends – many friends – so she’s the likely person I’d point the finger at. She probably got drunk one night and said the ‘ole “OK, I’m going to tell you something but you have to PROMISE not to tell anyone!” Right because that always works.

But how did the news get to Jessica? That’s where I get confused. I’m pretty sure Pippa isn’t phoning her up ever since she told the world that girls bullied Kate in grade school by throwing a piece of crap in her bed. But Jessica was a guest at the couple’s wedding reception so she must know people who know people who know people who would talk to Pippa. Could it have gone down that way? If not then Jessica Hay was just really, really good at dictating the news. True you didn’t have to be a genius to point out the face, haircut, and timing but it’s just so much easier to blame Pippa. She’s been so quiet lately! Too quiet! Could she be atoning for her big mouth?

Would Pippa Middleton tell Jessica Hay about the baby after everything she’s said? Probably not but would Pippa tell one of her close friends?

Attached – more pics of Prince William visiting Kate in the hospital. This is day three. Seven more months to go. I really have to pace myself.