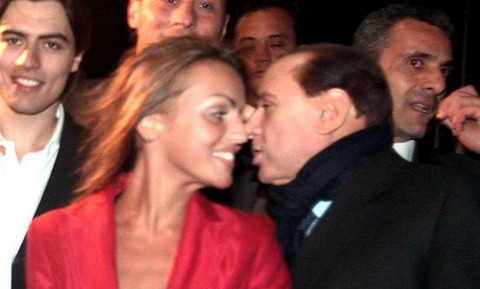 “It’s official, I have got engaged to Francesca Pascale and finally I feel less lonely. There is a 49 year age difference between us. She is a beautiful girl on the outside and even more beautiful on the inside, of solid moral principles, she is very close to me, she loves me and I feel the same way. She is a very good friend of my daughter Marina,” said the controversial former Italian Prime Minister Silvio Berlusconi during a recent television interview.

Silvio Berlusconi is officially a creep and lowlife – albeit a wealthy one.  Silvio controls and owns Mondadori the publishing company which owns mags that printed Kate Middelton’s topless and bottomless illegaly obtained pics. This polarizing political figure has been married twice, and is currently on trial for having sex with Moroccan belly dancer Karima El Mahroug, a 17-year-old minor. (Italy’s laws dictate that 14 is the official age for legal consent, but paying for sex with an under-18 is a form of prostitution that could land Berlusconi for three years behind bars) Berlusconi commented on this infamous sex trial, bunga bunga parties, and the events that transpired at his villa Arcore near Milan, by simply saying, “‘There was nothing illegal going on, they were just elegant dinners. It was a particular moment for me, I had just announced my divorce, my mother and my sister had just died. I would go home and there was no-one there, I felt sad.”

Berlusconi’s new fiancée was brought into the spotlight when she was spotted at his apartment some time ago. The two have since been spotted together at the San Siro stadium watching Berlusconi’s AC Milan soccer team and fraternizing like two lovers during a recent trip to an Italian pizzeria. However, Berlusconi and Pascale’s relationship stretches as far back as 2009, when Berlusconi officially supported Pascale’s run for office in Naples. Pascale is also infamous for singing a song about Berlusconi with the opening line, “If you pull your knickers down the ratings go up.” (A true class act)

Berlusconi recently announced that he will be running in 2013’s February General Elections, but unfortunately, the only thing Berlusconi will have going for him next year is a young wife, bad health, and maybe a trip to jail. His party is currently in third place in the national polls with just over 20% of the vote. The Democratic Left Pier Luigi Bersani is the favorite amongst potential voters.

It looks like “The Great Seducer” has done it again. Congratulations you two (we think?).