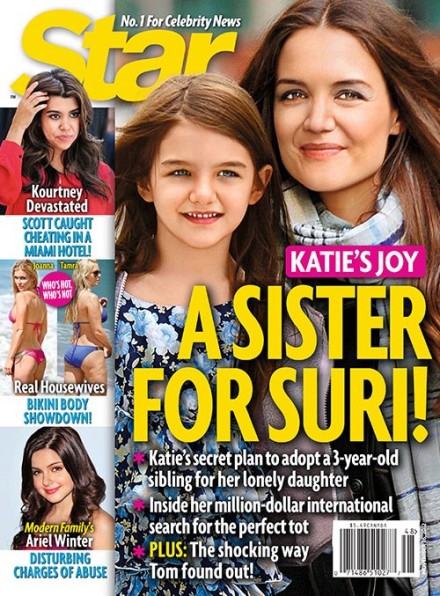 Katie Holmes’ adopting! What? The ink is barely dry on her divorce from Tom Cruise and she wants to add another short, needy creature into the mix. Apparently it’s a sister for Suri Cruise. Contrary to some Hollywood parents, adopted kids are not toys!

Star magazine’s cover has the story this week. Suri needs a sibling to combat the loneliness and Katie’s on a million-dollar manhunt to find the “perfect” child. Christ, that’s a lot of pressure. If Suri’s so lonely why doesn’t Katie just let Tom see her? He may be bat shit crazy but he’s a lot cheaper than buying a living, breathing, child. In her defense, I have a feeling Tom is more high maintenance than a 3-year-old.

Plus! There’s a plus! Star tells us how Tom found out! Was it over skype? Or just a quick text? Hi Tom, FYI – getting another baby. Hope London is fun. So happy we’re divorced!

I don’t know… as much as I want to believe all the craziness that flies around about Tom and Katie this story is scarily similar to the one Now magazine ran a month ago. Come on Star! You don’t need to make up stuff about Tom and Katie. The truth is scary and disturbing enough! Between the Broadway play and taking Suri to every ice cream parlor in Manhattan, I think Katie’s got her hands full at the moment. Although you never quite know about the quiet ones….

And also on the cover – Kourtney Kardashian is devastated by Scott Disick. This shit is way tired. He’s always devastating her. Apparently he cheated again. Kourtney must like getting cheated on since Scott’s done it so many times and she’s never left him. Either Scott’s a saint or Kourtney’s a masochist. I suppose it depends on Kris Jenner’s whim that day!

Not bad Star. Not bad. I like the Katie Holmes approach but the believability factor is low. Still… I’m flying soon… might make for a nice time killer.