Katie Holmes Worried About Suri Cruise, Wants Another Baby To Help Her Be Normal 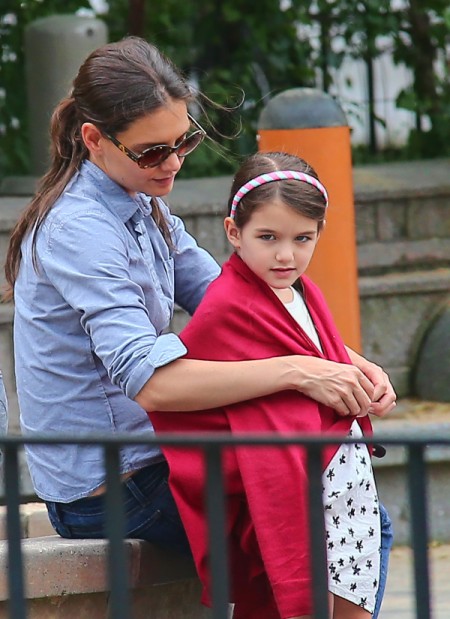 Apparently Katie doesn’t want Suri to grow up a spoiled only child. Too late for that? “She thinks having a child away from the influence of Scientology will help Suri. She has no plans to marry again, but she’s always wanted more kids,” a source told Now magazine.

I keep forgetting that Suri technically has two other siblings: Connor and Isabella Cruise, but they’re so much older than her, they don’t really count. And I could see how Katie, who has four siblings, would want her daughter to have the camaraderie of a big family – especially as a child of celebrities. As she gets older it will be hard enough to find friends she can trust who won’t sell her out to the nearest tabloid. Having a sibling will (usually) guarantee you someone you can trust unequivocally in your life. If it weren’t for Katie’s family, she’d still be chained to Tom. Maybe Katie wants to make sure Suri has people she can run to if she ever finds herself trapped in a marriage by a toothy religious freak.

But don’t you kind of feel bad for this imaginary baby already? It’s like the kid in that book, My Sister’s Keeper, only this baby isn’t created as an organ donor, but rather as a spirit donor. Suri’s weird! Suri’s spoiled! Suri’s been ruined by Scientology and it won’t get out of her body! Hurry, imaginary baby! Come and exorcise her! Make her fresh and pure and normal!

That baby has a big job on its hands. I wouldn’t want it. Check out the pic I posted above. Does Suri give you a Damien vibe? Suri’s going to find this post in 10 years and kick my ass!

Do you think it’s fair for Katie to think a new baby will help Suri adjust to life post-Scientology? Hasn’t that kid been through enough changes in the past few months?