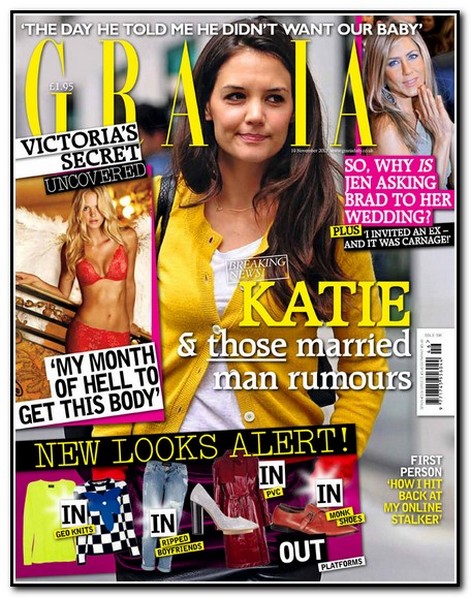 Katie Holmes made her great escape from her ill-fated marriage to Tom Cruise this summer to great fanfare. She broke it off with Scientology’s #1 cheerleader who was seen as the gatekeeper to her happiness but if the latest round of gossip is to be believed, she’s also breaking homes.

Grazia Magazine, courtesy of our dear friends from the United Kingdom, insinuates in a new cover story that Suri’s mom might be possibly having an affair with a married man. No other details are given which would defeat the purpose of paying for this info. In lieu of standing in line at the grocery store, the man she is being linked to in scandal is Josh Hamilton.

Hamilton is her co-star in the Broadway play, ‘Dead Accounts’. Rumors of life imitating art flared up because Katie kissed him like she was ready to forget there was a watching audience and put on a carnal exhibition. She was animated, believable and full of life which are apt characteristics not usually assigned to Katie’s acting choices. Her greatest role of the past few years was pulling the wool over Tom’s eyes and leaving him without so much of a notarized Dear Xenu letter. Tom found out about Katie’s mission to free herself from him when the rest of the world did. Overnight, she became canonized and left behind her previous incarnation as a Stepford wife.

Alas, blindsiding Tom was an undertaking for mass public consumption but not an effort to put on the professional resume. ‘Fly Away Holmes’ is one of the best dumpings of all time, but it doesn’t count when it comes to her career. Marrying Tom was supposed to be a boost, but it only brought down her score in both aspects.

Now that Katie’s a single lady, she seems finally free to emote—as much as Katie Holmes can. She’ll be linked to every co-star and man within breathing distance of her but Josh Hamilton doesn’t seem like the one she is going to spend her newfound capital on. It’s just too obvious. Her next guy is someone we’ll never see coming. The former Joey Potter has already proven that she can commit to a covert operation better than any spy.