Is Katie Holmes A Famewhore? (Photos) 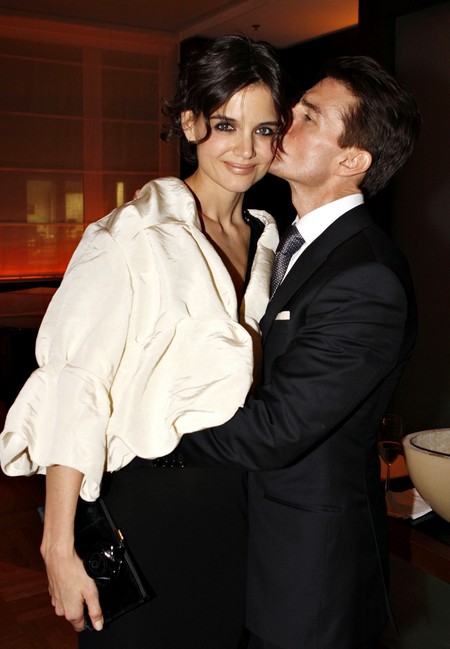 Katie Holmes is the new darling of America, the media, and all the world outside of Scientology. A recent poll on a major blog showed voters to be overwhelmingly on Team Katie’s side in her divorce battle with Tom Cruise – about 95% of the well over 200,000 votes cast favored Katie over Tom.  Amazing!

Poor Katie, desperate to save her daughter and herself from crazed Scientology fanatic Tom Cruise and the ‘Stepford Wives’ lifestyle he imposed.  This has been the underlying theme of the hundreds of stories I have read on this mega-divorce – including posts right here on CDL.  Stories about Katie’s ‘Tortured‘ life with Tom abound. Well I am going to play iconoclast here and take a different approach.

What if Katie Holmes was a plotting scheming famewhore!?  What if she, like the rest of the world, knew perfectly well that Tom was an ardent Scientologist when the couple married?  What if Katie was fully aware that Scientology would be a major, even dominant theme, in their married life together?  Well we have to believe that Katie knew at least as much as we did – right?

So we have established to our satisfaction that Katie knew EXACTLY what she was getting into with Tommy boy when she agreed to marry the freak.  And she married him anyway.  And she had his child – Suri Cruise. What’s up with that?  Katie knew that Suri was going to be brought up under the dark umbrella of Scientology when she agreed to have the child with Tom.

Katie became engaged to Tom just a few months after breaking up with her previous man, Chris Klein.  She was C-list TV actress with ‘Dawson Creek’ as her big claim to fame.   A Roman Catholic, she claimed to embrace Scientology, as soon as her relationship with Tom got going.

Hmmm… what do we see here?  A nothing actress gets the chance to ride Tom Cruise, one of Hollywood’s biggest stars over the past several decades, to fame and fortune.  Fame and fortune she could NEVER even get close to by relying on her own very marginal talent.  She takes this opportunity knowing full well that Scientology is for the insane and that she will never truly accept it.

A couple of years ago Katie made the first of many steps in preparing for her break from Tom.  This was when she made New York City her primary residence following her Broadway gig in All My Son’s.  Other steps included finding and renting a secret apartment and getting lawyered up.  Last week she struck!  Filing for divorce while Tom was in Iceland filming ‘Oblivion’ and simultaneously putting out the story that she did this to protect Suri from Scientology.

We claim that the theory that Katie knew exactly what she was doing by marrying Tom and that she never intended to stay with him once her 5 year plan was up is a viable working theory.  Does this make Katie a famewhore?  Well we will let you answer the question – but first think about this: does marrying Kris Humphries for reality TV make Kim Kardashian a famewhore?  If you answer ‘yes’ to the Kim question then you should think hard about your answer to the Katie question.