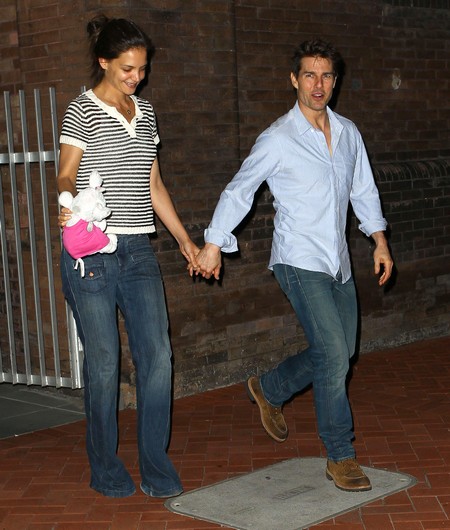 You can’t possibly be shocked by today’s (not so) bombshell news that Katie Holmes filed for divorce yesterday from husband of 5 years, Tom Cruise. I mean, we have heard reports of marital strife for all five of those years and Katie all but living under lock and key.  Even if you go back several months National Enquirer had the golden nugget below:

“Katie has been living such a tortured life with Tom Cruise,” alleges the Enquirer, “that pals are urging the actress to get a divorce.  She “is at the end of her rope” and is “just not the same happy, carefree woman she used to be.  She’s losing weight and trying to keep her slipping career together while being pressured to have another child by Tom,” all while coping with recent controversy over the Church of Scientology and a supposedly “strained relationship” with Cruise’s older daughter Bella.

“There are plenty of days when she wishes she could have her carefree single life back,” continues the Enquirer source. “I think that’s when thoughts of divorce probably flare up.  It must be miserable at times.”

Truthfully, Holmes appears to be a very hands on, good mother to little Suri and eventually, good mothers will do whatever it takes to dig themselves out of a miserable environment for the sake of their child.  Don’t forget, not only did she file for divorce, but Holmes also filed for sole physical custody.  THAT has got to mean something!

What are your thoughts on the power couples’ split?  Tell us in the comments below!