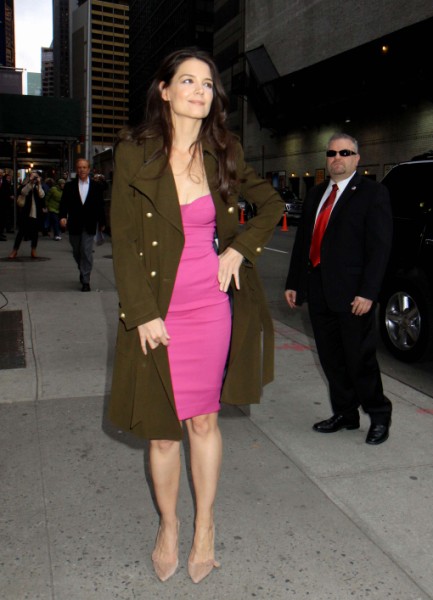 On the one hand you’ve got to think this is totally rude, but then on the other, who else would you want to get divorce advice from? Bethenny Frankel is nothing if not advantageous. When life hands you lemons you make lemonade. When you see a quarter on the ground you pick it up. If you’re getting a divorce and you find yourself in the same room as Katie Holmes, you ask about her divorce lawyer… and her hair stylist because her hair is absolutely amazing right now.

So that’s exactly what Bethenny Frankel did – although she should be slightly embarrassed at how everything went down. According to Page Six, Bethenny and Katie were both at Andy Cohen’s holiday party a few days ago and Bethenny had “one too many”. It doesn’t help that she probably didn’t eat for a couple days beforehand. Anyway, so Bethenny spotted Katie and wobbled over to her and yelled loud enough for surrounding people to hear, “I need a good divorce lawyer, can I have yours?”  In all fairness, Bethenny probably didn’t scream it but her voice is so loud and shrill it’s hard to tell the difference. Anyway, Katie was supposedly taken aback but just smiled politely and told Bethenny the name of her lawyer. All those years of keeping a calm face with Tom surely did come in handy. Naturally, Bethenny’s people are denying the story stating she already has a divorce lawyer.

I love this story. I think it’s hilarious. Katie Holmes is like the weird, exotic animal caged and brought back from the Americas for all the people to gawk at. It’s been six months and she still holds this enigmatic, mysterious vibe. There’s so much she knows! Why won’t she talk! Please Katie, just give us one moderately creepy story!

She might be crass and obnoxious but you’ve got to hand it to Bethenny Frankel asking for divorce advice. Katie Holmes has this untouchable, magical feel to her. She’s the one who practically took down Scientology yet Bethenny accosted her for very human and relatable information. I’m not sure how I feel about it. I’d like to keep believing that Katie Holmes escaped Tom Cruise with her lust for freedom, a secret phone and the under wiring from one of her bras. A divorce lawyer makes it all seem so much less Sleeping with the Enemy.