Katie Holmes Gets $100K Makeover for Some New Man Candy 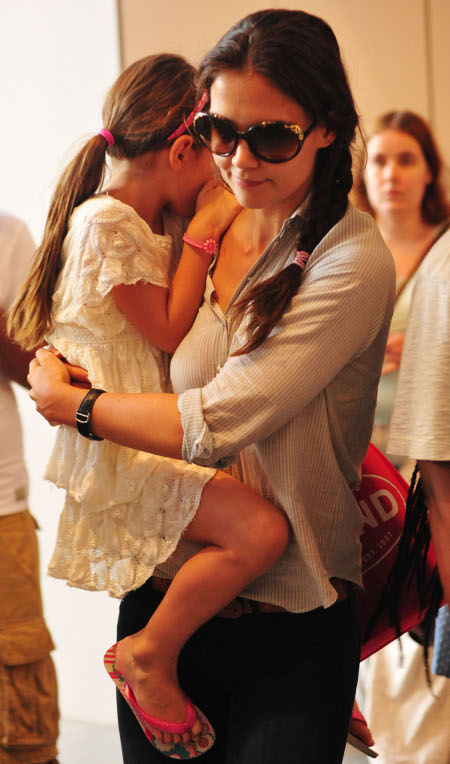 Since Katie Holmes is no longer under the grip of The Church of Scientology and Tom Cruise, she thought it would be a good idea to go and get herself a little makeover. However, not a makeover like you or I get when we may get our hair done, purchase a new outfit, and throw out a couple hundred dollars. Holmes went out and got herself a brand new $100,000 makeover! Wow, the money you can make when you marry and divorce Tom Cruise.

Not that I blame Katie at all. For the past year, before Holmes secretly filed for divorce from Cruise, her outfits were looking a little “mommish” and not that that is a bad thing, after all Holmes and Cruise have 6-year-old Suri. But when Suri was dressing in dressier and probably more expensive clothes than Holmes, that’s when it becomes a problem. Holmes would wear jeans, those awful brown booties all the time, and usually just a plain button down shirt — only dresses on occasion, and that was mostly when she was on the red carpet for an event.

Now that Holmes is no longer Robo-Katie under the harsh lights of Xenu, she has decided it’s time to get a makeover in hopes of landing a new man . . . one who has no affiliations to The Church of Scientology. There were speculations that when the two first got together that Holmes wasn’t allowed to wear heels, as her eccentric ex-husband has height issues. Well, now Holmes can buy all the heels she wants and wear them with leather pants. In fact, she was seen strutting her stuff just a few weeks ago with a mystery man.

With this $100K style fix, Holmes hopes to land a man out of this as well. Dressing her age and not like she just rolled out of bed recently, Holmes has her eyes set on anyone that can see past the former hold that Xenu once had on her.

And what better way to go through all that money? Why hang out with Victoria Beckham again of course. Holmes wants to look the best she can and with her tall, slender frame, Beckham is sure to make it happen for her with her dress collection. In the beginning of the Holmes-Cruise marriage, we saw them hanging out with the Beckham bunch on many different occasions and Katie figures who better to dress her than Victoria? Holmes knows if she can put herself out there publicly like Beckham and own the clothes she’s wearing then she can have a man as handsome as David Beckham.

Holmes may have to lose the smile though when she is wearing her Beckham outfits and get some botox to get rid of those wrinkles, which I can only imagine came from Cruise and Co. Don’t judge me, love is mean and love hurts, and clearly Holmes was in desperate need of a makeover.