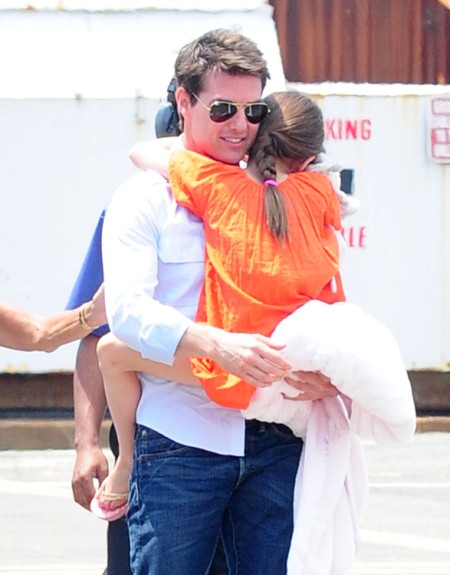 Tom Cruise just can’t keep himself away from Katie Holmes and is following his ex to New York City. Page Six reports the “sad but not bitter” actor is looking to buy a bachelor pad so he can be closer to his daughter, Suri Cruise, and keep an eye on Katie.

OK, I made that last part up, but don’t you think Tom would use the closer proximity to his advantage and do some spying? I do!

Page Six says Tom will not go back to the apartment he and Katie shared because that would just be too weird but he’s not looking to set up shop in the fashionable Chelsea area like his ex wife either. Rather, he’s looking for something secluded and ginormous.

“Tom’s looking for a new home here,” a source said. “He wants a fresh start. He doesn’t want to go back to the East Village apartment where he was living with Katie. He’s looking for something that’s very private where he won’t have to deal with going through a lobby, and people outside all the time. He also wants to have a nice amount of space for Suri, with outdoor space. That could mean high-end luxury apartments, but he’s also looking at houses outside of the city or in gated communities.”

Oh, poor Katie! I bet she thought she was actually free. She moved 2,000 miles away but that still wasn’t far enough for Tom to get the picture. You didn’t think Tom was going to be cool with only seeing Suri on Skype did you? Katie might have primary custody but Tom is definitely going to take advantage of that “generous” visitation rights clause.

On a less smutty note, Tom has his own plane but the five hour flight from NYC to LA is annoying and LONG. I’m sure Tom doesn’t want Suri making it constantly by herself. It actually makes sense for him to set up shop close to her while she’s so young. Maybe he can ditch it as she gets older or, who knows, maybe he’ll pick up another NYC chick and make the move permanent. Then Katie might decide she likes LA better after all!

Do you think Tom’s move is really all about Suri or do you think it has something to do with his lack of closure with Katie as well?