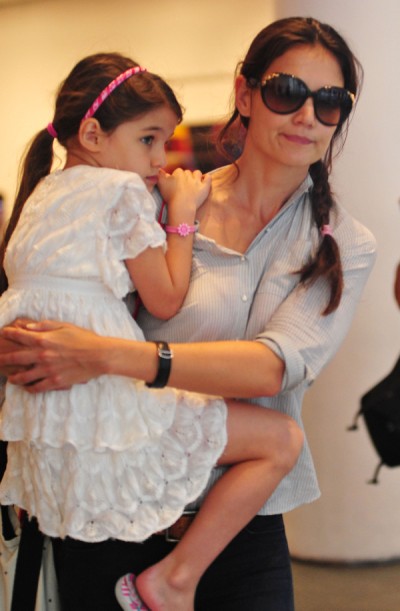 After the euphoria of ditching Tom Cruise and ridding the world of Scientology with one crafty cell phone and an Oscar-winning performance has passed, Katie Holmes has come down to reality and has a case of the Mondays. You like my use of revisionist history there? Anyway, although reports have surfaced from Radar Online, that Katie is “blissfully happy” since her split from Tom and subsequent Sex and the City lifestyle she’s been acting out every day on the streets of NYC, the Daily Mail writes she’s having a difficult time navigating her new singleness and has hired a confidence/life coach to help find herself again.

A source told Grazia: ‘She foresaw an incredible golden future for her and Suri, free of Tom and Scientology. But the glow and radiance that surrounded Katie post-split seem to have evaporated.

‘Katie is keen to find her own voice so she has sought professional help and has employed a confidence and life coach who she’s been seeing once a week to help her regain who she once was.’

It is thought the star’s confidence was rocked when Suri returned from her lavish trip to Florida, where Tom didn’t hold back on treating her to a whole host of elaborate gifts. With Katie trying to create a more normal lifestyle for the youngster, including visits to the zoo and meals from street vendors instead of fancy restaurants, the actress is said to be concerned that the couple’s daughter may be living two very different existences.

And to add to her woes, Katie is reportedly ‘terrified’ of returning to Los Angeles, where the Church of Scientology – the controversial religion to which Tom belongs – is based.

OK, let’s tackle Tom and Suri first. Tom is pulling the insufferable tricks that divorced dads have been relying on since the dawn of time – he’s spoiling her daughter silly and making her life heaven on earth when they’re together. How many times has he taken that kid to Disney World since the divorce? A couple? How can you compete with that? The pics below are of Katie taking Suri to another museum. I mean zoos and museums are fun but they’re not the happiest place on earth. Katie has every right to be concerned. Suri is living separate lives and Katie’s going to be the not as fun parent… very crafty Tom, very craft indeed. Can you blame him for fighting dirty though? I don’t.

Now as for the confidence coach… whatever. It’s probably a lot like going to a psychologist. You talk. They listen and offer advice. You leave feeling better. Who doesn’t need that from time to time? There can be chinks in Katie’s armor. She isn’t the superwoman she appeared to be when she jedi mind-tricked her way out of that marriage. As any divorced person will tell you, there will be good days and absolute sh-t days, probably for awhile. And it’s not like she can look anywhere for an example to go by. Nicole Kidman got dumped by Tom and lost her kids. I can’t think of any other high powered A-list stars who got out from under Scientology with their reputation and children in tact. Katie’s on an uncharted journey and she’s paying the price now and she’ll pay forever. Tom isn’t going to make this easy on her. I’m not saying he’s using Suri but you bet your ass he’s going to do whatever he wants with that kid despite Katie’s protestations. Katie might want Suri to have a normal life but Tom doesn’t understand the word, nor does he want to.