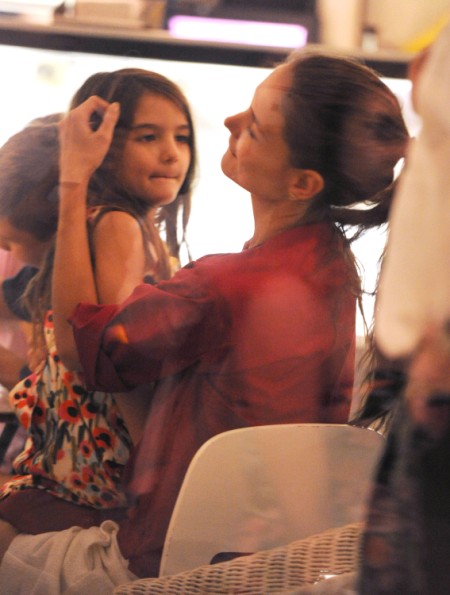 Katie Holmes must have learned a thing or two from those cooky Scientologists and Tom Cruise’s ex-wife Nicole Kidman because she could single-handedly take down the house that L. Ron Hubbard built all by using his “attack, don’t defend” philosophy to get sole custody of Suri Cruise.

“Katie could blow Scientology wide open,” said Mark Rathbun, who was in the church for 22 years before leaving in late 2004. According to The Hollywood Reporter, Rathburn writes a popular blog with former members and was Cruise’s auditor and handled his divorce from Kidman. “If Tom’s smart, he won’t fight her on anything, even custody. He should just try to settle his way out of it. She could press this sole-custody issue and litigate it and that would be the biggest nightmare in the Church of Scientology’s history. It would be a circus they couldn’t survive.”

“With Katie, it’s like she’s taking a leaf from L. Ron Hubbard’s own playbook,” says Marc Headley, an ex-Scientologist who fled the church in 2005. “Hubbard always said: Attack, don’t defend.”

It seems Katie’s lot might be easier than Nicole’s was. I’ve already reported on how much more powerful Tom was when he divorced Nicole eleven years ago and it seems a lot of the higher ups in Scientology who helped discourage and intimidate mainstream media from reporting on Scientology at that time have left the church. The field isn’t necessarily wide open for Katie to launch her offensive, but it’s not as narrow as it was for Nicole.

Katie’s main goal is to keep Suri out of Scientology but she’s also trying to keep the church from turning her daughter against her. Ex-Scientologist Karen De La Carriere told the Reporter that Holmes may be legitimately scared for her daughter since Scientology deliberately turned the two adopted children of Cruise and Kidman against Kidman after their split.

Although Rathburn says Tom was a “total gentleman” towards Nicole during their split, he does allow that the church, including Cruise’s home staff, began to poison Nicole’s image in front of her children. “Tommy [Davis] told them over and over again their mother was a sociopath and after a while they believed him. They had daily sessions with Tommy. I was there. I saw it.”

When Nicole found out, she did try to win her children back, a source told the Reporter. But by that point it was too late. She didn’t have the resources to make a defensive play for her children who spent the majority of the time in Cruise’s care.

Katie’s determined to learn from Nicole’s naive mistakes. She’s fired Tom’s people who were representing her and even went as far as to fire Tom and Nicole’s daughter, Isabella Cruise a couple months ago because she didn’t want her around, and potentially learning of her divorce plans. It might seem harsh, but Katie couldn’t afford to make any errors and she wanted to send a message.

“By filing for sole custody of Suri, she’s making it very clear she’s not going to let what happened with Nicole Kidman happen to her,” said De La Carriere.

Do you think Katie can take on a weaker Scientology or is this just the calm before the storm?