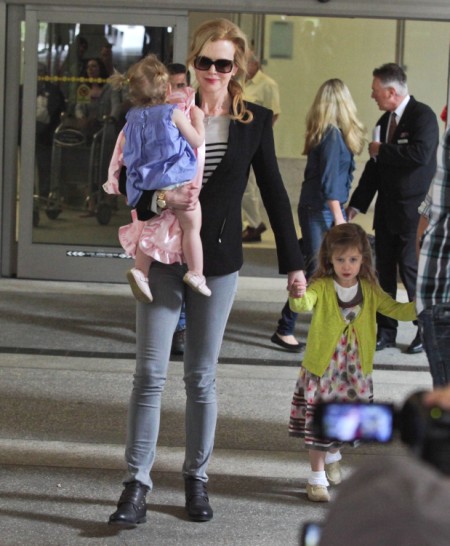 The comparisons were inevitable so is Katie Holmes’ decision to keep Suri Cruise out of Tom Cruise and Scientology’s clutches making Nicole Kidman look like an uncaring mother or was she just a victim of Tom’s overwhelming power?

You knew it was going to get back to Nicole somehow because she hasn’t talked about Katie and Tom’s divorce. I can understand why she wouldn’t but I can’t understand why she hasn’t be hounded by the press yet. Obviously it’s not in Nicole’s nature to talk. She’s barely said a word about her ten-year marriage to Cruise since their divorce eleven years ago. But that divorce was weird and got weirder as time went on. People whisper that Tom had something on Nicole which is why she was able to go free with joint custody but pretty much left the kids behind to be raised 100% by Tom and his Scientology minions. Both Tom and Nicole’s kids are true Scientologists in every sense of the word.

So now the comparisons will come. Was Nicole just weak or did she not guard her audits as well as Katie did? Did she cheat on Tom and have a miscarriage like people speculated? Could Tom have ruined her career with that information? Because remember, Nicole scored an Oscar a couple years after the divorce. Were her children and her silence the price she paid to be considered one of the top actresses in Hollywood?

Does Katie have that to lose? Most would say no. Katie hasn’t wowed with her acting of late. So did Kidman choose her career over her children? We’ll probably never know but what’s interesting is that Rupert Murdoch is speaking out. The Australian mogul is VERY tight with Nicole, like she’s the godmother of his grandchild tight, and he took to twitter to go after Scientology. He tweeted, “Scientology back in news. Very weird cult, but big, big money involved with Tom Cruise either number two or three in hiearchy” and “Watch Katie Holmes and Scientology story develop. Something creepy, maybe even evil, about these people.”

Why would Murdoch speak out? He’s no stranger to controversy, though he’s usually the one creating it, but could his tweets in some way be defending his friend when she won’t defend herself? Because what Rupert is really saying here is that Scientology is evil; Tom Cruise is Scientology, therefore, Tom Cruise is evil. So Nicole was living with an evil man and he did evil things. Don’t blame her for the way everything went down.

Do you buy this reasoning? I think Nicole does look like a sh-t mother for what she did. But did she have a choice? Lainey Gossip makes a good point in that Tom was at the top of the game when he divorced Nicole. The couch jumping and maniacal laughter hadn’t kicked in yet. He could basically do whatever he wanted and no one prodded into his private life too much. Times are different not. Katie has leverage from all the crazy and Tom might not have as much dirt on her so she’s willing to go to bat. Can you blame Nicole for not trying as hard to keep her children with her?