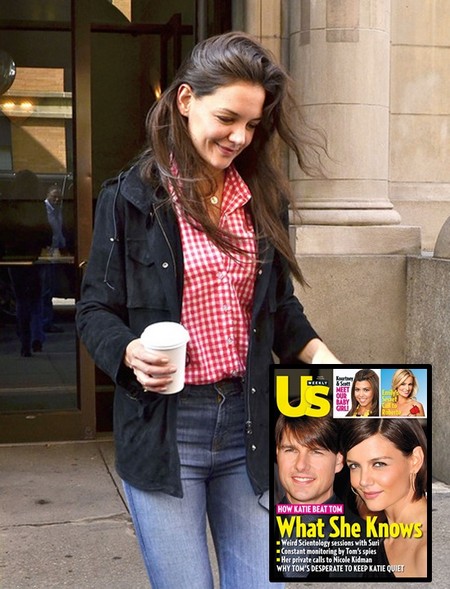 Katie Holmes found a friendle! What is a friendle? It is a portmanteau of friend and handle, like a crutch, with a smiley face. Who is this friendle? None other than Tom Cruise’s ex-wife, the neurotic Nicole Kidman!

Wow, Katie, you sure know how to choose them!  It isn’t a brand new friendship either. According to Us Weekly, “the women have been speaking since Holmes’ 2006 marriage to Cruise”.

A source close to Katie says, “She’s been a private friend not many people know about.” No sh*t on the private part! Imagine what Tom and his cronies would have done, Scientologists love the smell of broken bones in the morning.

Nicole Kidman is like the secret agent who saves the forlorn woman from the Mexican mob and death. She has been there for Katie throughout all of the drama with Tom, lending her a very bony shoulder to cry on. Katie has been reaching out to Nicole, as we believe Katie thought that Nicole has a PhD in Tom Cruise crazy.

Katie reached breaking point (or a massive publicity stunt) in her marriage to Tom Cruise and before she filed for divorce, she reached out to Nicole again. They most probably discussed Scientology and Tom’s deviancy over Mimosas that tasted like tears and perfume. Katie laughed with a tinge of melancholy in her voice and placed her well manicured hand on Nicole’s arm, before mouthing “thank you” and winking slightly.

“Nicole offered her support and help”. Yes, after they watched the finale of The Bachelor and played Charades with the kids. The Bachelor comes first in any unstable household.

Let us know in the comments below your thoughts and reactions.