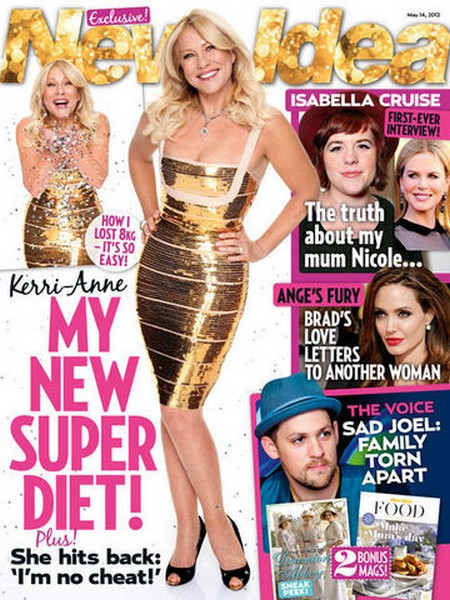 Nicole Kidman’s daughter is actually talking about her! And no, I don’t mean the two toddlers she has with husband, Keith Urban. Isabella Cruise, Kidman’s and Tom Cruise’s adopted daughter, is finally acknowledging her famous mother’s existence.

In an interview with New Idea magazine, the ultra private 19-year-old squashes rumors that she and her mother do not speak. “I love mom. She’s my mom. She’s great. I see her sometimes and I speak to her. We’re a very close family. I love all of our family.”

Not the gushing type, is she? Her words feel cryptically odd though. The awkwardness of “I see her sometimes” makes me cringe. You just want to shake the Cruises and scream, “Just be normal!”

In all fairness, it’s not just Isabella who can be bad with words. Much has been made about Nicole’s relationship with her two adopted children with her ex husband. In 2007, Nicole made all the headlines when she told GMTV, “My kids don’t call me mommy. They don’t even call me mom. They call me Nicole, which I hate and tell them off for it.”

After the divorce, Tom got the kids and raised them to be scientologists like him. They were homeschooled and, until recently, have stayed out of the public eye, and hardly ever seen with Nicole. Instead, they were always with Tom and current Stepford wife, Katie Holmes, who they had no issue calling mom.

Nicole moved on to Keith Urban and has two baby girls, Sunday Rose, 3, and Faith Margaret, 14 months, who they have no problem getting papped with at airports the world over. In fact, Nicole is on the cover of next month’s Harper’s Bazaar Australia with Faith, who is looking away from the cameras. Nicole explained her reasoning for letting Faith be included in the picture. “I think it’s OK, because you can’t see their faces; they’re still protected. I feel it’s a really lovely way to celebrate being a mum and being a family, and they’re my daughters, and they’re Keith’s daughters [laughs] … you can see the hair!”

I don’t know…something just always feels off with this family. Naturally because I think Tom pops crazy pills, I think he had a lot to do with the estrangement between the two women. Nicole seems to love being a mom and I can’t help but feel she wanted to be one with her adopted children. Maybe since Isabella’s getting older and no longer lives with her dad, she’s beginning to have another shot at a relationship with her mom. But daddy pays the bills so who knows how far the relationship can go.

What do you guys think about Isabella’s recent comments? Can it just be summed up as teenage animosity between a girl and her mother or do you sense some Scientology strings being pulled?