Katie Holmes: Tom Cruise Was Too Old For Me! 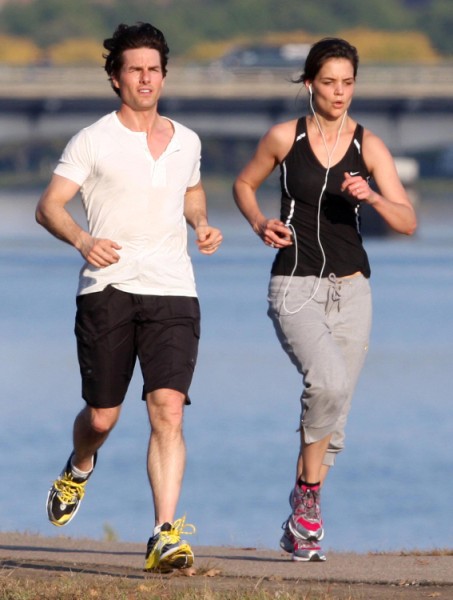 I thought about adding “And Too Crazy” to the end of the title but I didn’t want to put too many words in Katie Holmes’ mouth. But you get the idea! It turns out the 17-year age gap proved to be too much for Katie who’s given her friends strict instructions on finding new boyfriend material. Funny… I thought Scientology would the major deal breaker for her at this point.

According to Entertainmentwise, a source told the National Enquirer she said: “Don’t even think about introducing me to any man more than five years older than I am! Next time, I want someone more my own age.”

Oh come on now. Let’s be fair to Tom Cruise. He’s hot as hell. And if you didn’t like being with a dude that much older than that’s your problem – not Tom’s. He was probably just as lame when he was at 30 only he was so ridiculously good looking people turned a blind eye. Was it the dancing? I know… I can’t defend Tommy on that one. Check it out here if you’ve never seen it. It will blow your mind! He’s a crap dancer, very out of his element. That would have been hard for me to watch as a wife. I love my husband but sometimes he does things and I’m just like WTF? But it’s cool because he’s not crazy. Katie Holmes didn’t have that to fall back on. Tom was lame and crazy and as every Hollywood actress reaching forty will tell you – your looks only take you so far. So I get that Katie wants to keep it younger this time around. I just can’t believe Tom with all his rock climbing/stunt doing/chopper riding didn’t act young at heart. Maybe when Katie said she wanted someone younger that was code for I want someone saner, that’s all. And at the end of the day, who doesn’t want that?

Do you think Tom Cruise was too old for Katie Holmes? Can you imagine him acting like an ‘ole fuddy duddy or should Katie Holmes take some responsibility for morphing into a Stepford wife soon after meeting the A-lister?