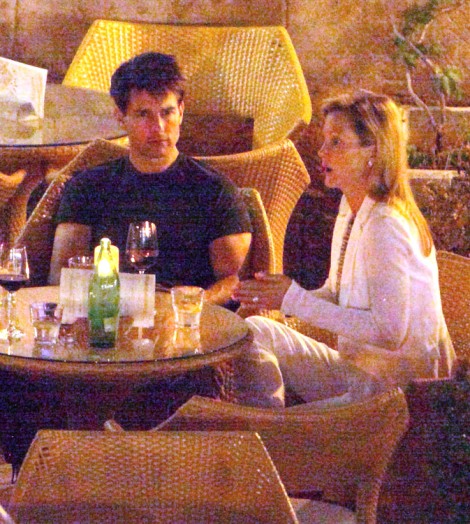 Tom Cruise has been hot on the prowl for the next Mrs. Tom Cruise since Katie Holmes got a clue and stopped drinking the Kool-Aid earlier this summer. But we’re finding it’s not so easy for the former sexiest man alive and current nuttiest dude in Hollywood to find a woman. There’s a process and Vanity Fair magazine uncovered the super sly hoops Scientology makes a potential girlfriend jump through if she wants to be the religion’s next first lady.

In 2004, Cruise’s creepy best friend, and Scientology chief, David Miscavige, dispatched his wife to find a girlfriend for Tom. She interviewed a bunch of Scientology members who were actresses and settled on Iranian-born, Londoner, Nazanin Boniadi. She was told to lose her boyfriend, her braces and her highlights. Yep, I’d say those are the important things for any new relationship and Tom thought so too because he was down with Nazanin at first. But then she opened her mouth and started voicing opinions and she had to go!

Though the first month of the relationship was bliss, by the second month Boniadi was more and more often found wanting, Orth reports. According to the knowledgeable source, anything she said or did that Cruise found fault with he immediately reported to a member of the Scientology staff, and she would be audited for it. This began with her very first words to him, “Very well done,” regarding his receiving Scientology’s Freedom Medal of Valor. The phrase implied that Cruise was her junior.

According to Orth, Boniadi was in love with Cruise, but the intensity of his affection, especially his predilection for public displays, overwhelmed her. “I get more love from an extra than I get from you,” the actor reportedly complained. Every day Boniadi spent two to three hours purging herself of “negative thoughts about Tom.” She felt completely shut off; her only source of money was a credit card issued in the name of Cruise’s production company.

Cruise eventually couldn’t take her anymore and had one of his minions break up with her and now she’s selling L. Ron Hubbard’s Dianetics on street corners. No seriously, that wasn’t a joke! Apparently Nazanin wasn’t A-list enough for Tom. He said he “wants someone with her own power—like Nicole.” I guess you don’t get to be Tom Cruise without being a little snobby… and bat sh-t crazy. Naturally, Tom and all his people are denying this kind of stuff goes down and naturally I totally believe it! Tom was all over Katie Holmes when they first started dating but she was willing to play along. I’m sure Miscavige would have wanted a Scientology A-lister for Tom instead of Katie but are there any of them out there? There’s Kelly Preston but she’s busy bearding for John Travolta. There’s Kirstie Alley but she’s too old and mouthy for Tom. Lisa Marie Presley’s too much of a head case. So he had to dip outside of the dating pool. He probably thought Katie would be more pliable since she was so young… but he was wrong!

But you know who I can’t help but think about? Penelope Cruz. She dated Tom for two years. What was that about? If stories like Nazanin’s are true then did Tom’s people put Penelope through the process as well? Can you see Penelope using Tom as a way to boost her career? Do you think it was a mutual thing between them? That doesn’t sound like Penelope’s game but that’s what ended up happening. American audiences got introduced to the Spanish beauty and Tom convinced the world he wasn’t crazy. Too bad Penelope’s married. He could use her again!

Do you think there’s any truth to this story? It almost seems too odd not to be real, you know? Are you surprised? Can Tom fool another enterprising girl into holy matrimony? He might be trying. Attached are pics of Tom getting cozy with a blond in Croatia. God he’s hot. Why does he have to be a nut job? He looks a little sad, don’t you think?