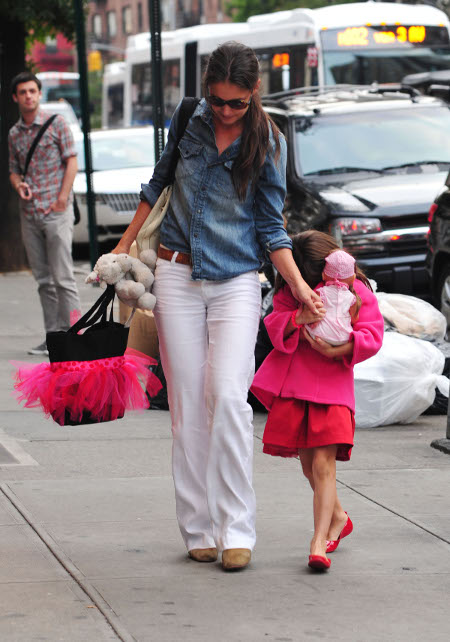 Katie Holmes recently split from her crazy husband Tom Cruise, but that doesn’t mean she’s planning on staying single for much longer. She’s ready to find herself a new man. Katie Holmes dating again is good news for the Celeb World, as I’m sure there are plenty of eligible bachelors out there that wouldn’t mind becoming her boo. Her divorce from the Scientology master quickly fell off the headlines after several other major stories and scandals broke, but she’s not ready to fade into celeb obscurity yet. She’s getting back in the game.

Katie is planning on getting back to work, and she will be starring in the Broadway play Deadly Matters. Tickets went on sale August 18th. While she does have her daughter Suri in her life to keep her company, it’s no surprise that Katie would like to find a significant other to spend time with.

Even in light of Tom Cruise and Katie Holmes’ divorce, a source for OK! Magazine says, “Katie has told friends that she is ready to start meeting some guys — she doesn’t expect to meet Mr. Right immediately, but she is definitely looking. Her design partner, Jeanne Yang, has already lined up a few possibilities. They are making a big effort to keep things under the radar, but Katie is really looking forward to getting back out there — and having some fun again.”

Wow, Katie isn’t wasting any time, which might be good for her. But how do you think Suri will react to a new man barging into her life? Chances are, she’s not going to like Katie Holmes’ new boyfriend much — whomever it’s going to be.