Tom Cruise Not Blindsided By Divorce: He Knew Katie Holmes Planned To File 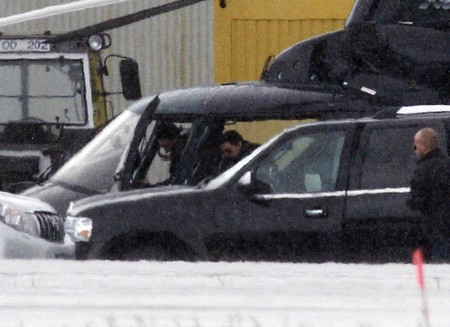 Everyone is saying Tom Cruise was blindsided by Katie Holmes filing for divorce last week and requesting sole custody of their daughter, Suri Cruise. But as we revealed earlier, Tom and Katie have been de facto separated for at least the past several weeks, and their time together as man and wife was already over at the time of Katie’s filing. What does this imply about the true state of affairs inside Scientology’s number one couple?

We already know that Scientology’s number two couple, John Travolta and Kelly Preston, are busy doing damage control.  Those two freaks are trying to pretend that John’s numerous extra-marital gay affairs didn’t happen and don’t matter anyway, even if John did get a little frisky with a few dozen dudes…  Of course Kelly is a much more devoted Scientology acolyte than Katie!

But back to Cruise control for a bit – what the heck, are we supposed to believe that Tom didn’t know about this divorce, that it comes as surprise to him? A man who just learned that his darling wife, his soul mate, the mother of Suri who is his flesh and blood, filed for divorce and sole custody would not be off filming in Iceland today.  He would be with Katie trying everything he could to keep their marriage alive – he would use his considerable intelligence and charm, plus his massive resources within Scientology and in the bank to win Katie back.  He would make concessions – he would agree to change – HE WOULD DO SOMETHING!!  But no, Tom is in Iceland filming another stupid movie – Oblivion – what an apt title… This just doesn’t make any sense.

RadarOnline reports: The actor is filming sci-fi movie Oblivion in Reykjavik and his kids Isabella and Connor are there to support their dad.

The Hollywood star was seen on board a helicopter in the Nordic European country with dark shades covering his eyes.

I smell a rat.  This whole deal doesn’t add up.  Since we know that Tom had been separated for weeks before Katie filed, we have to assume that he knew divorce was a possibility.  So if he wanted to stay married why didn’t he act? There is more here than simply the case of a disgruntled wife who had all she could stand of Tom’s crazed adherence to Scientology.  We won’t pretend to know the whole story behind this divorce-turned-media-bonanza but we promise you that we will find out and report it to you.