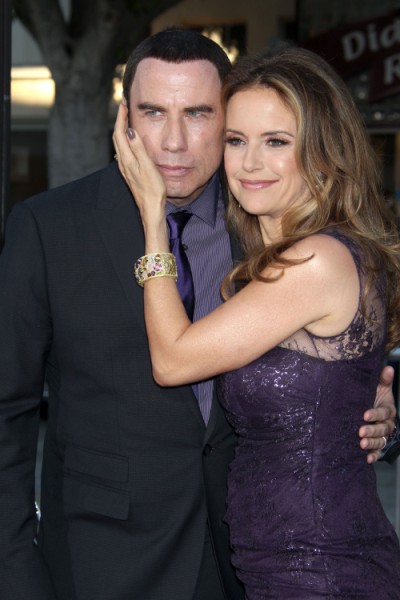 All that nasty making out on the Savages red carpet must have worked because John Travolta has snared his claws into Kelly Preston yet again and convinced her not to leave his massage-loving, scandalous, cheating heart.

Kelly is sticking by her man in the face of cringe-worthy sexual allegations and embarrassing toupees.

“Kelly has called off divorce proceedings for the time being after John agreed to follow her rules,” a family friend told The Enquirer.

“With the disgrace she’s endured over his sex antics, the bottom line is that Kelly is worried a divorce right now would mean even more humiliation for her and the kids.”

The “Jerry Maguire” beauty is most insistent that the couple give their children – 19 month-old son Ben, and daughter Ella Bleu, 12 – another sibling, insiders say…

On the advice of Kelly’s closest pal and fellow Scientologist, Kirstie Alley, the two have also reimmersed themselves in intensive church counseling.

“Scientology therapy worked for them in the past, so Kelly is hoping it holds the key to saving them again,” the source explained…

“Kelly is willing to forgive but not forget, and she has demanded that John recommit himself to her and their family life.”

That’s what I think every shaky marriage needs – Scientology and another baby – because if history’s taught us anything, it’s that more children make a relationship less stressful and fulfilling. But you can’t blame her right? It’s easy to tell her to just divorce him, but she’s outing herself if she does that. If she divorces him then everyone will know she played along for so long. It’s much easier to feel compassion for someone who didn’t know their husband was maybe gaybe and a connoisseur of bath houses the world over then it is to feel for a beautiful, rich women who is tired of the lies after fronting them for 20 years. John’s sad and pathetic, but Kelly’s the enabler. And she has kids which makes it worse and wants to bring more into the relationship which is double worse! But she needs affection from somebody, right?

Should Kelly wipe her hands and come clean or is she in too deep to ever escape?