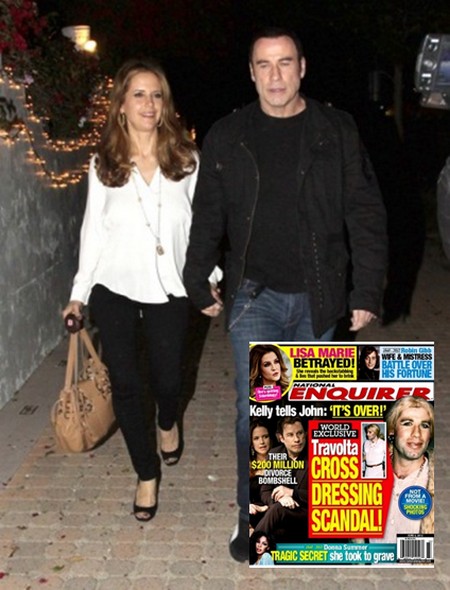 There is a disturbing report out today that John Travolta and Kelly Preston are going to divorce now that John’s cross-dressing has been exposed.  Kelly has taken all that she can, and more, since multiple masseurs have come out and accused John of a quite a variety of sexual misconduct.  Several of John’s accusers have filed legal complaints and Kelly is dying of shame.

But today’s revelation by the National Enquirer of John’s extensive cross-dressing has blown the top off an already shaky marriage.  According to the Enquirer it is all over but the crying for Kelly and John as a married couple.  One wonders how CO$ will react to a divorce between two of their biggest stars.  The Scientologists handled Tom Cruise and Nicole Kidman’s split… somehow.

As we reported earlier, John has dressed as a women before in a professional capacity when he played middle-aged mom Edna Turnblad in a remake of John Waters’ classic Hairspray.  When he took that role it was said that the powers that be – like David Miscavige – in the Scientology community were less than thrilled with John playing a cross-dresser.  They must be really freaking out over this Enquirer Cover.

Some say that all this talk about divorce is just silly – that the Enquirer has made it up.  Well maybe… but weeks before John was sued by the masseurs the Enquirer broke the story of his sexual predation.  They seem to know things.

What do you think.  Are John and Kelly through or will they bury all this, perhaps with the help of fellow CO$ member Kirstie Alley, and move on together.