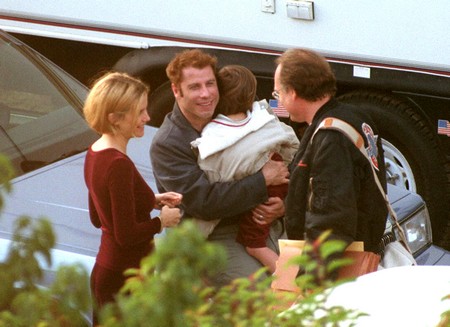 Scientology helped Kelly Preston and John Travolta cope with Jett’s death. Of course this was before husband John’s gay sex massage scandal – now Kelly will really need lots more support.  In an interview filmed before her husband’s seemingly never-ending sexual assault lawsuits, Kelly laments the immense loss she experienced after losing Jett and how Scientology helped her pull through.

The 49-year-old actress and her husband of 21 years, John, were rocked by tragedy when 16-year-old son, Jett, died in 2009 after suffering a seizure in the Bahamas. But speaking on ‘The Conversation With Amanda de Cadenet’ Kelly says it was the religion that has been the butt of so many jokes and so much controversy that helped Kelly find that her life was still worth living.

“People were so beautiful – so, so extraordinary from all over the world. Everybody grieves in their own way. I felt at times like I was drowning. It felt like a sea of wet blankets. And then I just peeled them off, layer by layer, so that I can now say, ‘I want to live. I love life. My life is beautiful and amazing. In Scientology, we have what’s called ‘auditing,’ and that helps you to address things in your life and to strip them away and work through them. It’s a path of spiritual enlightenment. Also, it helps rid the mind of painful experience completely. Through that, the people at my church literally held my hand and got me through. . .I will forever be indebted. You never forget, but I feel like the weight of the world was lifted.”

Kelly gave birth to 18-month-old son, Benjamin, in 2010 and admits it was something she and John had to think long and hard about considering her age and everything they went through.

“Having another child after this experience – we had to think about it, especially this late in life,” she said “I always wanted to have more kids. I feel like I would even have another child, but it might be pushing it. I’m not afraid to love and to love deeply. My kids help me with that. They open up your heart so much. There’s nothing like the love of a child… it’s the greatest thing ever.”

I’m genuinely happy for Kelly. I’m sure many of us cannot imagine living with the kind of devastation that comes with losing a child. But that’s why I’m confused over her relationship with John. I’m not saying the sexual allegations are true, but hypothetically, if one of the many were, then how can she stay with him? And worse, how can he keep embarrassing her after all she’s been through. I can understand the marriage might have been a friendly arrangement at the beginning, built on mutual affection and friendship, but he used to be able to keep his spa shenanigans closer to the vest. Now, everything’s hitting the fan making not just him a joke, but her as well, and that’s unfortunate. Scientology might be able to audit the past out of you, but in John’s case, it obviously can’t audit the filth presently inside. She’s got to be furious that his little indiscretions are getting out.

So she turns to her children. I get it. Children bring joy especially in marriages where the passion and happy might be harder to find. That’s what makes the loss of Jett so much more heartbreaking. It makes you wonder how much a person can take. That’s why I can’t go too crazy against scientology in this case. I’m not a member but it keeps her going. It helps her sleep at night and sometimes, that makes all the difference.