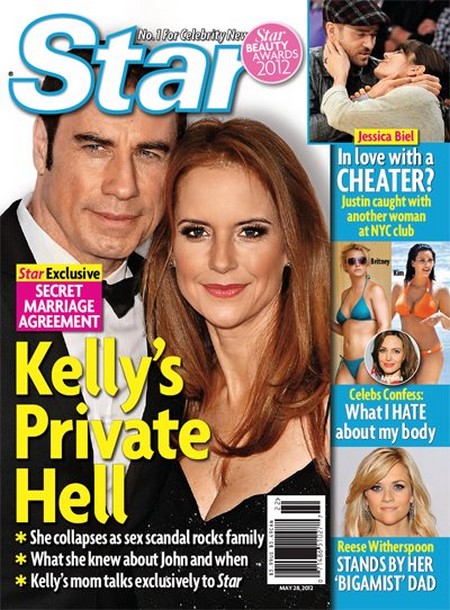 Kelly Preston‘s marriage woes cover the current issue of Star magazine as the actress no doubt is in complete shock and outrage over the new allegations against husband, John Travolta and his alternative spa lifestyle. Kelly’s mom is talking exclusively to the magazine about how her daughter collapsed from the recent media firestorm and even discusses what Kelly has known about Travolta’s sexual tastes all along.

Star is also calling out Justin Timberlake for cheating on new fiance, Jessica Biel. Her engagement ring isn’t even dirty yet and already Star reports the pop star was caught with another woman at a club in NYC. This isn’t the first time rumors have surfaced over Justin’s less than stellar monogamous record. It was hinted he stepped out with Olivia Munn while he and Jessica were together. Will this be it for Jessica? Will she call the wedding off because Justin refuses to keep it in his pants or are the years of waiting and the allure of the white designer dress enough to keep Jessica looking the other way?

The magazine also fills us in on Reese Witherspoon‘s family drama which is taking a turn for the absurd. Reese is standing by her “bigamist father”! John Witherspoon is currently getting sued by Reese’s mother, Mary Elizabeth “Betty” Witherspoon, for marrying another woman while they are still married. Betty is also accusing her husband of suffering from dementia and declares she still loves him and wants to stay married. It was reported John did not even remember his faux wedding to Tricianne Taylor last January though the couple are living together in a Nashville home owned by the Oscar winner.

But what a change of heart for Reese! She denied Tricianne access to her wedding to Jim Toth last year because she wasn’t on the guest list. But her parents haven’t lived together since 1996 so maybe she just wants to see her father move on.

And for those of you nervous about donning those swimsuits this summer, you’re not alone! Angelina Jolie, Kim Kardashian and Britney Spears are just a few stars the magazine is highlighting that hate nagging things about their bodies. Even while losing weight by going gluten free on her “divorce diet” Kim can still find things to complain about. And with her X Factor job on the horizon, Britney has promised Simon Cowell she would be glammed up and ready for her close-ups. But I don’t think Angelina Jolie has their problems. She might have a fairy tale wedding on the brain but the scary skinny actress needs to put on pounds before she gets in that revealing suit and hits the beach. Unless, of course, the Brad Pitt rumors are true and he really does like his women to have that famished look.

Are you going to pick up the newest Star? I think there’s some good stuff here to keep me turning the pages for awhile. And I’m a sucker for celebrities in bathing suits complaining about their love handles.