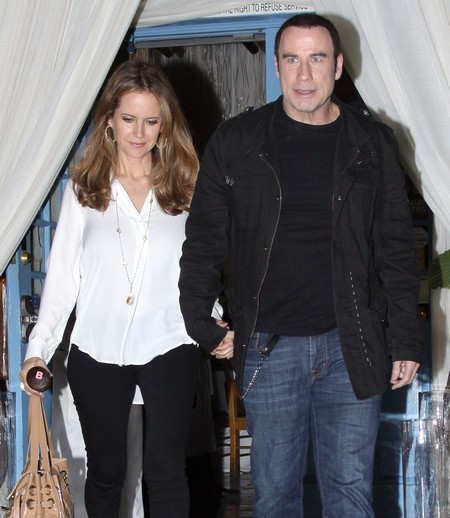 John Travolta and Kelly Preston’s marriage has been rocked by the revelations of John’s secret gay love affairs. Talk of Kelly leaving John for good and getting a divorce has naturally circulated recently. Last week we reported here at CDL that a long-time lover of John’s, pilot Doug Gotterba, had revealed shocking details of John’s infidelity – Kelly was certainly not pleased.

But rather than do what a sane person would upon learning that their spouse was deeply involved in multiple clandestine affairs behind their back, braindead Stepford wife Kelly has opted for a reality TV show cure!  Rather than take John to task for being a deceitful creep, Kelly has decided to show the world what a perfectly loving family she has. And how better to show the world that all is well in freaky Travolta/Preston Scientology land than to offer up another moronic scripted reality TV show.

As a truly brainwashed Scientology acolyte Kelly remains loyal to John – amazing! Can you just imagine watching this show on OWN?  We’ll get to see Oprah Winfrey introduce the season opener in her typical melodramatic pseudo-intellectual style… ‘despite facing public scorn and ridicule over his molestation of countless masseurs and his secret love affairs, John Travolta has kept his family strong with the help of his devoted wife Kelly Preston…’  I want to see John Travolta on reality TV!

The National Enquirer’s Mike Walker reveals: Just weeks ago I scooped that OPRAH WINFREY pitched Scientology pals TOM CRUISE, JOHN TRAVOLTA, KIRSTIE ALLEY, and Sci-friendly WILL SMITH & JADA PINKETT to puhleeeze sign on for up-close-and-personal TV reality shows, but all O got was “we’ll think about it”… until NOW!

Said a source: “John has a thick skin when it comes to these gay headlines, but Kelly suddenly realized that bringing cameras into their home might be the perfect way to show that she and John are a REAL husband and wife in a tight-knit, loving family.”

If we see it on TV it must be true – right?  I mean what is reality if it doesn’t appear on our flat screens?  History used to be written by the victors – now it is created by the producers and directors.  Do you agree or do you think that what you see on TV and at the movies is true?  If we see a family appearing happy for 30 minutes each week on TV does it mean anything at all?