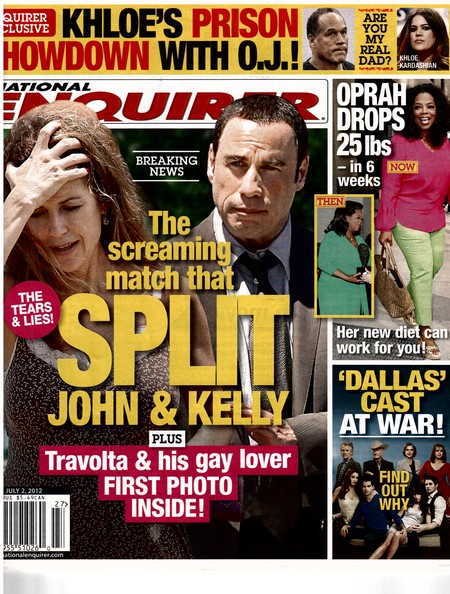 John Travolta’s gay sex scandal continues to plague the star legally while it also destroys his marriage to Kelly Preston. Years of deceit and cheating with multiple lovers can sort of do that to a relationship. So Johnny decided to fly Kelly to Hawaii for a holiday in the sun where he could work his considerable charm on his disgruntled wife and try to save his troubled marriage.

But as the National Enquirer reports in the cover story of the July 2 Print Edition, what transpired was instead was ‘The Screaming Match that SPLIT John & Kelly!’  The Enquirer reports that instead of reconciling, John and Kelly had a massive fight that insiders are calling their ‘nastiest screaming match ever!’

‘It could break them up for good’ said a close source.  ‘Kelly packed her bags and was ready to leave, but John convinced her to stay and present a united face to the public by leaving the island with him.’   According to The Enquirer, insiders report that Kelly is ‘embarrassed and humiliated beyond belief’ by the lawsuits filed against John by male masseurs claiming sexual battery.  The Enquirer takes credit for adding to Kelly’s distress by revealing that Doug Gotterba, John’s former pilot, carried on a six-year sexual affair with him in the 1980’s.

According to The Enquirer, during their ‘romantic getaway’ the couple stayed with friends at a private home in Kauai – but romance ended fast when Kelly exploded in a fit of rage after she learned of John’s long term love affair with Doug. ‘She boiled over and ripped into him’ said the source and ‘lashed out at Travolta and is wondering what’s next.’  Can you blame her?

Whatever else happened on the ‘romantic getaway’ you can read in the print edition, like I did.  But the bottom line is that if Kelly were not a brainwashed Scientology freak she would dump that two-timing (make that twelve-timing) bum and get out of the relationship. I mean where is the woman’s self-respect?