Prostitute Confirms That John Travolta Is Her Client (Photo) 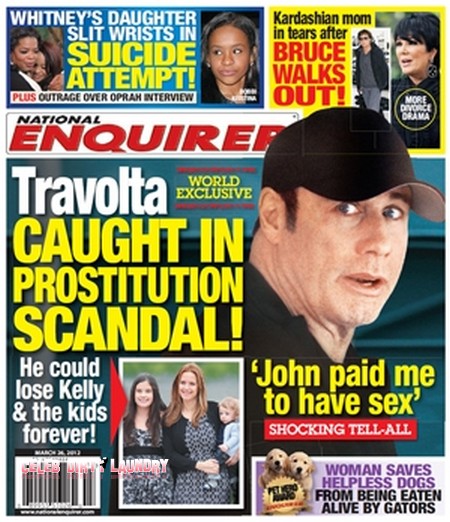 The cover of the March 28th issue of The National Enquirer features the shocking news of John Travolta caught in a prostitution scandal.  A source reveals that John paid money to have sex and as a consequence his family is in tatters.    In fact The Enquirer claims that the source is the prostitute herself!  Could this be another Sara Leal story in the making? The Enquirer suggests that John will lose his wife, Kelly Preston, and the kids forever!

John has been accused in the past of buying sex from women and men!  Can all these stories be fictional?  A couple of months ago John and Kelly almost split up over his grief stemming from the death of their son, Jett Travolta who died tragically in 2009.

At that time John experienced a near total breakdown from which he has yet to recover.  Could this latest sexual scandal be John’s way of acting out?  Does John’ belief in Scientology cause any him conflict when he frequents prostitutes?

Also on the cover is the shocking story of Kim Kardashian’s momanager, Kris Jenner losing it after hubby Bruce Jenner walks out!  It is a miracle that the Olympic champion hadn’t packed his bags sooner.  Can you imagine being around Kris and her revolting Kardashian sisters all the time.  It’s enough to make a man humiliate them!

There is also mention on the cover of the sad Bobbi Kristina who The Enquirer claims has slit her wrists in attempted suicide.  This of all the cover stories is the one that is most likely true.  Bobbi Kristina is seriously disturbed and since appearing on Oprah she has apparently become engaged to a man who is almost her step brother!

There are even more amazing stories mentioned on the cover and we will be covering them all when The Enquirer comes out in print edition later in the week.  Stay tuned!