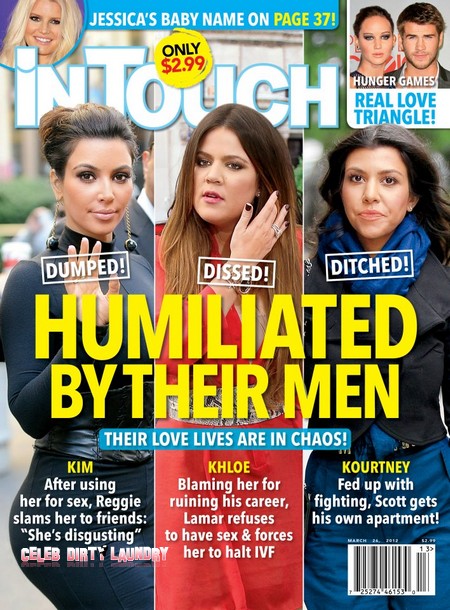 The cover of the March 28 issue of In Touch Magazine features an expose of how Kim Kardashian and sisters Khloe and Kourtney have been humiliated by their men.  Now that is a bit of a switch since the Kardashian sisters are usually portrayed as bossy bitches that rule the roost but apparently they suffer as well – not just their men.

We learn that Reggie Bush used Kim for kinky wild sex – he treated her like a $10 whore – but then told friends:   “She’s disgusting!”  Can you imagine – Kim Kardashian reduced to begging for sex and then being tossed like a cheap hooker?

Next comes Khloe – it seems that Lamar claims that she ruined his career.  We all know that Lamar was demoted to the minor leagues last week after playing the worst basketball of his career.  Lamar is so pissed off at Khloe that he refuses to have sex with her and is forcing her to get pregnant via IVF!

And what about Kourtney?  Well Scott is so fed up with the constant fighting that he has moved out and gotten his own apartment!  Scott has always been a bit of dog so perhaps Kourtney will be better off without the cheater?

In Touch features the blurb: Kardashian Sisters Humiliated By Their Men – Secretly reunited with low-key NFL star Reggie Bush — and even promising to give up her reality TV career to elope with him — Kim figured a ring was coming in no time. But clearly, Reggie didn’t share her feelings. As pregnant Kourtney struggles with weight gain, stress and morning sickness, baby daddy Scott Disick isn’t helping her one bit. Khloé used to think her husband, Lamar Odom, shared her dream of having a baby — but no more. Ever since Lamar was traded from the LA Lakers to the Dallas Mavericks — and temporarily demoted to the D-League — Lamar, 32, has blamed Khloé and her fame-seeking family.

Don’t forget to come back to CDL Friday when we will have all the juicy details of these outrageous revelations!