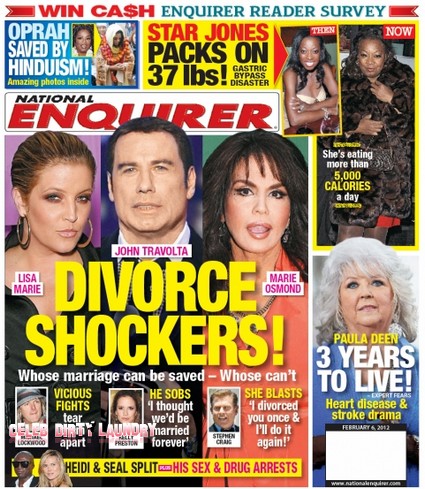 As Hollywood is drowning in a sea of celeb divorces, breakups, and separations we about to be hit by a monster wave – John Travolta is divorcing Kelly Preston! According to the current issue of the National Enquirer, not only Travolta, but Lisa Marie and Marie Osmond are about to leave their partners.

One month ago rumors circulated that Travolta had walked out on Preston over grief stemming from the death of their son, Jett Travolta who died tragically in 2009. At that time the Enquirer claimed that Travolta had a shocking breakdown over the death with Preston in tears as he sobbed to her, ‘I still blame myself for Jett’s death.’

Travolta’s son died at only 16 in the Bahamas, reportedly from a seizure which caused him to hit his head on the bathtub. His seizures were frequent and as such he was rarely left alone. He was hospitalized when he was 15 months old with Kawasaki disease, a rare illness that mainly affects young children. It’s treatable but can have unforeseen complications, including lasting damage to the heart. Travolta has called Jett “my heart” in the past.

We’ll have to wait until the print edition of the National Enquirer is released to get all the details on these three alleged breakups.

Also on the cover we learn that Paula Deen has only 3 years to live!

Even with serious Type II diabetes Paula insists on eating like a pig – and as celeb chef she is sending the wrong dietary message to others. Many people are angry over the fact that she has been shilling her unhealthy, artery-clogging recipes for so many years, without ever cautioning that eating a butter-laden diet could cause major health problems.

“Thinking of getting into the leg-breaking business, so I can profitably sell crutches later,” fellow chef Anthony Bourdain Tweeted after hearing the news that Paula is now endorsing a diabetes medication.

Paula promoting a diabetes medication is like a drunk alcoholic promoting a rehab clinic. With a diet like Paula’s there is no medication that will help.