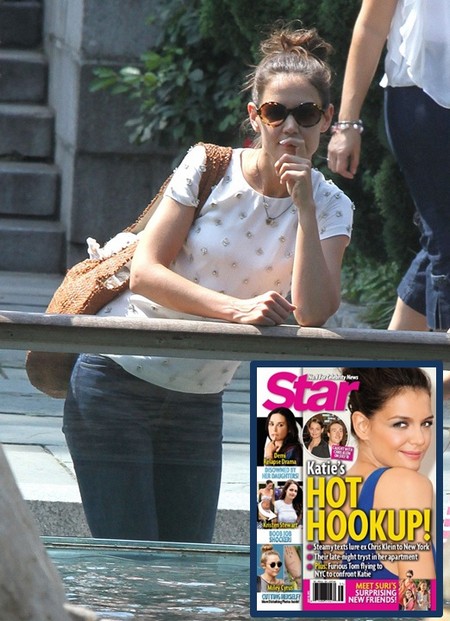 The current issue of Star Magazine features the cover story ‘Katie’s Hot Hookup.’  The magazine reveals Katie Holmes‘ new man. Now is he really her new man?  NO, he is actually her old man.  The man in question is her ex-fiance Chris Klein and the magazine claims she was caught with him July 10th, 2012…gasp…  Katie and Chris were engaged for two years before they split up and she married Tom Cruise.

Furthermore, they have all the details on the steamy text messages Katie sent to Chris to lure him to New York City.  If that is not enough we will be able to learn all about Katie and Chris’ late night trysts in her apartment.  Tom Cruise is said to be so furious he is heading to New York City to confront Katie.

As a matter of fact Celeb Dirty Laundry reported today that Tom Cruise was back in New York City today and saw his daughter Suri the first time since the divorce was announced.  However, it is being reported that Tom has not seen Katie yet.  So if you were hoping for fireworks it has not happened yet. What do you think is Katie hooking up with her old fiance?  Is Chris Klein going to be Katie Holmes’ boyfriend? Hit the comments and let us know what you think.

We have seen Katie heading out in New York City since the divorce was announced with daily photo ops with Suri.  In a lot of the photo ops Suri looks rather awful.  Is she being overexposed by her ambitious mother?

Also included in this week’s issue poor Demi Moore is reportedly relapsing again and her daughters have already disowned her but now there are rumors they are getting a restraining order to keep Mom Demi away.  I think they are hoping their extreme measures will shock her back into rehab again.  Of course maybe they just want Demi out of their hair!