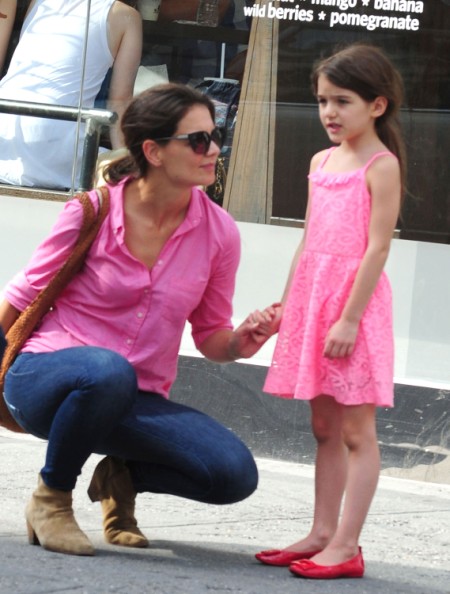 Things have settled down ever since the Tom Cruise and Katie Holmes divorce settlement bombshell hit last week leaving most of us stunned and relieved for little Suri Cruise. But when the spoiled Suri threw another teary-eyed temper tantrum after her mother refused to buy her a puppy over the weekend in NYC, I had to wonder why is Katie allowing her daughter to still be papped so much? Is Suri in danger of being spoiled and over-exposed all before she hits the ripe old age of seven?

First of all, shame on Katie. Why on earth would you bring a kid to a pet store if you weren’t going to take anything home? That’s shady and I can understand why Suri had the pouts. The problem is that Suri has the pouts a lot. How do I know that? Because I see pics of her EVERY DAY! Suri and Katie went out for ice cream. Suri and Katie went to the Children’s Museum. Suri and Katie fed animals at the zoo!

Ever the cynic, I get why Katie paraded her daughter around during the divorce. She wanted the public on her side and wanted to be seen as a doting, loving mother while Scientology-crazed Tom kept filming his new movie in Iceland. But the divorce is settled. Can’t Suri have a rest from all the cameras? If Katie’s main argument against Tom was the effects Scientology would have over the impressionable youngster, then couldn’t the argument go the other way? It can’t be good for that kid to have paparazzi and crowds shoving her around all day long.

Now I know you’re going to say the delightfully free duo can’t live inside their NYC apartment, shut away from the world. But do you think Angelina Jolie and Brad Pitt’s kids never see the light of day? How about Julia Roberts’ or Johnny Depp’s? Sure those kids get papped sometimes but we don’t see the half of it. Those couples know how to be stealth and if they don’t want us to see something – we won’t. Clearly, Katie doesn’t have their kind of power but if she wanted to make herself less visible, stopping the Taxis would be a good start. I know she’s trying to play the whole “Suri Cruise is a New Yorker and she takes taxis” bit but can’t Katie teach that lesson in a few years? Because I’m not sure what she’s getting out of this arrangement. Is she thanking the media for taking her side and throwing some photo ops our way?

Maybe Katie’s style of parenting is just to keep going. Life doesn’t stop so neither should she or Suri. But I can’t help but think a nice little vacation on a secluded island would have been beneficial. And before you bash me for not having a heart, I realize Suri’s life is upside down right now. If Katie wants to feed her nothing but ice cream for the next year then she should go for it. But the feedback I would be interested in is from the divorced or children of divorce. Did your parents spoil you after they split and, if so, do you think that was effective to moving on? Also, what do you think about Katie placing Suri so close to the line of paparazzi fire? Is she still working her public image or does she honestly think it’s good for Suri to be out and about every day in front of the cameras?

Check out the photos below. This is just a small sampling. There is so much more of Katie and Suri’s NYC adventures and it’s like we’ve been asked to go along for the ride!