Looks Just Like Her Mom! First Pics Of Lily-Rose Depp Since Her Parents’ Split (Photos) 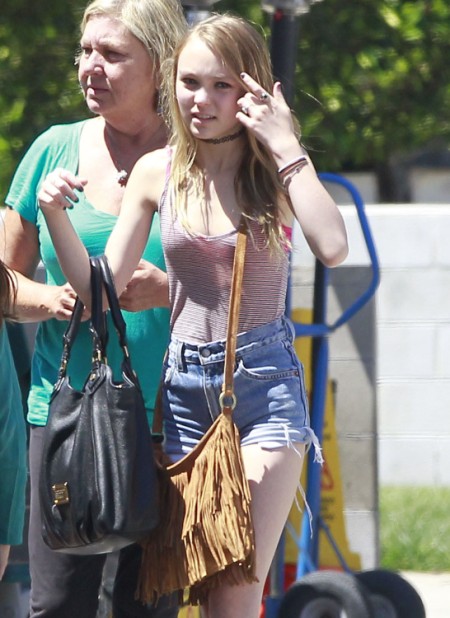 Vanessa Paradis and Johnny Depp have laid low ever since announcing their split but their 13-year-old daughter Lily-Rose Depp seems ready to make her debut in Hollywood. Vanessa’s little twin has been spotted around LA shopping and lunching with nannies looking every inch the half Parisian/half wild child her parents’ genes intend her to be.

I’ve actually never seen Lily-Rose close up like this before. She’s beautiful. Mark my words, she’ll be Marc Jacobs’ muse in two years. She’s destined to model. She’s got the style down already. I wouldn’t like my thirteen-year-old daughter wearing those shorts out in public but I’m sensing Vanessa might be lax about fashion in that household. I’m in awe in how much she looks like her mom. It’s uncanny. It’s like she got the best French features but got American teeth which can never be underappreciated.

But I’m sensing some Depp wild child in her, how about you? Vanessa’s having a hard time dealing with Depp’s other woman, Amber Heard. She’s even gone so far as to order her to stay away from her children. Lily-Rose is at that age where she’s going to rebel against someone – anyone. It’s kind of interesting timing that we’re seeing her out now. Johnny and Vanessa have always done a great job in keeping the kids away from the paparazzi. Now that the family’s relocated to LA, that’s going to be a lot harder. This teenager is going to get a lot of press if she keeps flashing those legs. She might be the new scene-stealer of the Paradis-Depp household.

What do you think? Am I making a lot out of nothing or does this girl look like a star in the making?