Robert Pattinson Agrees To Meeting With Kristen Stewart But He Has Conditions! 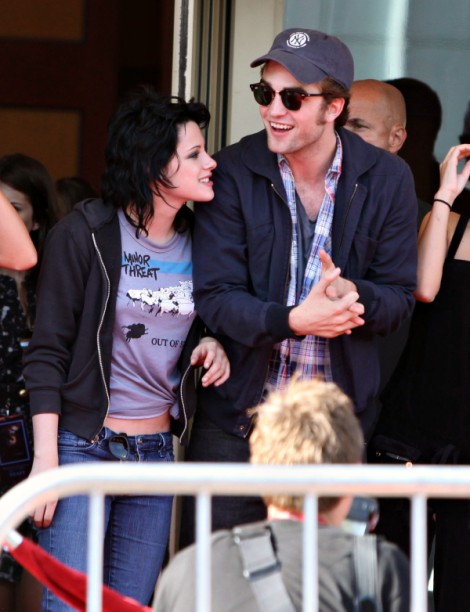 Getting out among his adoring and psychotic public has done his body and his mind good because Robert Pattinson has finally agreed to meet face-to-face with his ex-girlfriend, Kristen Stewart. The conciliatory gesture came after an emotional hour-long conversation between the pair where Kristen screamed and begged for a second chance. When she realized that wasn’t going to happen, because she screwed her director in a mini cooper, she settled for a meeting.

A source told Look magazine (via Daily Mail): “She begged to meet face to face so they could talk. It was obvious Kristen was getting through to Rob and he has agreed to see her. In fact, he admitted that it must be worse for her because she’s not just dealing with heartbreak, but being portrayed as a villain, while he gets all the sympathy. For the first couple of weeks he was wallowing in his own grief, but being forced to face people during this promo, and seeing how angry everyone is with Kristen, made him feel sad for her.”

But she isn’t getting off that easy. Apparently Rob told her if they were going to get back together there had to be some ground rules. First she has to agree to spend more time with him between movies (like Angelina Jolie and Brad Pitt the source said) and she has to hang out more in London rather than LA.

Kristen’s so desperate for him to take her back she wouldn’t bat an eye if he told her he was going to walk the red carpet with her in November wearing an “I’m with stupid” T-shirt. These conditions are a little on the light side but revealing, no? Rob wanted his woman around and she was off making the monies. Kind of pathetic? Kind of endearing? I can’t decide. He was doing so well post-split with his great interviews and smokin’ new trim face. His people shouldn’t want more nonsense like this coming out. Sad sack Rob who misses his cheating girlfriend and will only take her back if she vows to spend more time with him isn’t cute. Lean and mean Rob who’s only walking the red carpet with Kristen because he doesn’t want the eggs thrown at her face to splash and ruin his new suit is kind of hot.

But this much is for sure, if Rob is laying ground rules then he’s contemplating a reunion and if he’s contemplating a reunion then there will pretty much be one. Are you OK with this? I always thought he might so I guess now is about the time. If Rob thinks he might hook up with Kristen again, best to just do it, and stop torturing the poor girl.

What do you think about Rob and Kristen reuniting? Will Rob cave? Does Kristen even want him back or is the thought of being alone that horrible to a 22-year-old?