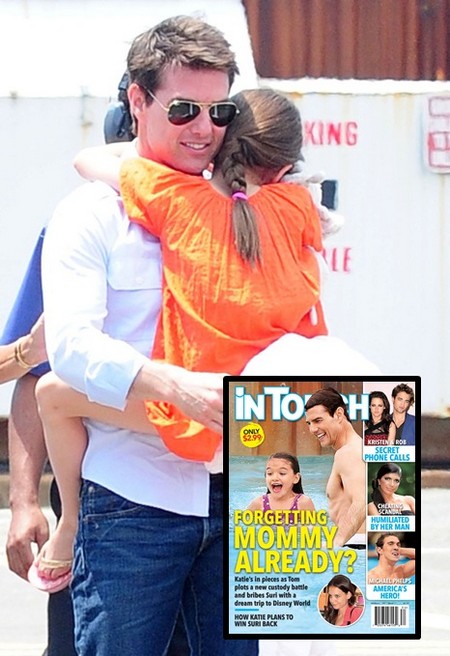 Oddly enough In Touch Weekly strayed away from the Kristen Stewart and Robert Pattinson cheating scandal and instead focused back on Tom Cruise and Katie Holmes’ never-ending fight for the love (and custody) of their daughter, Suri Cruise. The magazine’s cover shows an exuberantly happy Suri swimming alongside her trimmed down and hunky father while on their Disney World vacation last week.

It’s a far cry from the sad and sulky frowns we always see on Suri’s puss while she’s out with Katie. Perhaps Suri isn’t as big a fan of taxis, museums and flying commercial as Katie wants her to be. Or maybe Tom’s lavish vacations are just too damn much to compete with. While in Disney, Tom and Suri stayed in the suite at Cinderella’s Castle. You know the one I’m talking about? That beautiful castle that sits in the middle of the park and even grown women like myself stare wistfully at it hoping it will swallow us whole? Ya, normal people can’t stay there. Apparently, the suite is mostly used for charity events but Suri got to stay there and overlook Fantasyland all night! Have I mentioned I hate this kid with the fiery passion of a thousand suns? Oh all right, I don’t hate her, I’m just jealous!

And so is Katie. It seems she’s not a fan of Tom’s spoiling parenting techniques and is worried Tom is using his over-the-top rendezvous with Suri to try to convince her to forget her mom and live with him full-time like his children with Nicole Kidman. In Touch says Katie’s “in pieces” over Tom’s new custody battle plans and is devising ways to keep Suri normal and with her in NYC.

We all thought Katie won just a little too easily, didn’t we? Tom’s hands were tied with the Scientology backlash and filming commitments so he couldn’t fight Katie’s demands probably as much as he would have wanted to. It’s a little different now and Tom is pulling out all the stops. I wonder what Katie will do. What can she do really? She can’t play Tom’s game. She has to be a mom and raise her child the way she sees fit. Can you imagine if both parent’s played the “who can spoil Suri the most game”? That child would turn into the worst human being ever! Katie has to stay above the Disney World vacations. Suri might not like it in the short run but she’ll appreciate it later in life ( I hope). I honestly feel for Katie on this one. She’s trying to do the best she can to raise that baby but it won’t be easy. Suri’s always going to prefer hanging with her dad if Tom gives her everything she wants. I would be the same way and I’m not six.

I’m definitely going to pick up this week’s In Touch. I want to see the other Disney World pics! If they show Suri in that castle I don’t know what I’ll do! I’ll probably snuggle up on the couch and watch Tangled. That always makes me feel better.

Do you think Tom’s vacations are a ploy to get Suri to ditch Katie and live with him so he can feed her Scientology for breakfast, lunch and dinner? Or are his motivations less sinister and he just wants to make his daughter happy while he gets to see her?