What Katie Holmes Told Suri Cruise About The Divorce 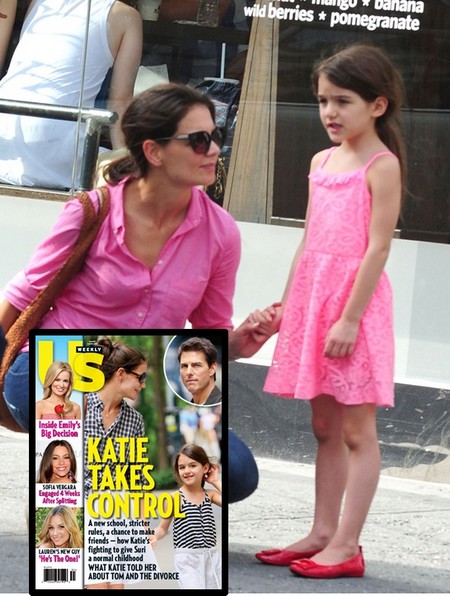 US Weekly magazine features a tougher, stronger, more in control Katie Holmes who’s taking charge of her new free life away from Tom Cruise as she navigates raising Suri Cruise primarily by herself. The magazine reveals what Katie has told Suri about the divorce so far and why a storm of paparazzi is highlighting her each and every move.

How hard must that have been? How do you begin explaining this crazy divorce to a six-year-old? Although Katie has made it quite clear she doesn’t want Scientology anywhere near Suri’s life, she still wants Suri to know that her father will continue to be there for her. Katie and Tom have set up Skype so Tom can talk to Suri whenever he wants to and vice versa when Suri is staying with Tom.

Katie has worked quickly and efficiently indoctrinating Suri into the ways of NYC living and striking out on her own. She’s already set up house in Manhattan and enrolled Suri in a private Catholic school that has seen the likes of Lady Gaga and Nicki Hilton. Katie’s also put her foot down over Suri’s wardrobe choices. She’s informed the six-year-old that she has to ditch her fancy threads, high-heels and make-up for more conservative apparel and has told her designer buds to no longer send freebies to the budding fashionista.

Although Tom and Katie are avoiding each other like the plague the former couple have pledged to be civil to each other for Suri’s sake. The world watched yesterday as the power shifted and Tom got his first crack at the media playing the doting father as he visited Suri for the first time since Katie filed for divorce. He held her in his arms while outside his hotel and even dropped her off at gymnastics class at Chelsea Piers. The magazine declares Katie is adamant in not letting Tom spoil Suri anymore and is determined to give her a normal upbringing similar to her own.

At this point, do you even think that’s possible? I’m not so sure but I’ll check out the magazine anyway because I’m dying to know all the details. Let me know your thoughts!