Suri Cruise Sobs ‘I Want To Live With Daddy!’ 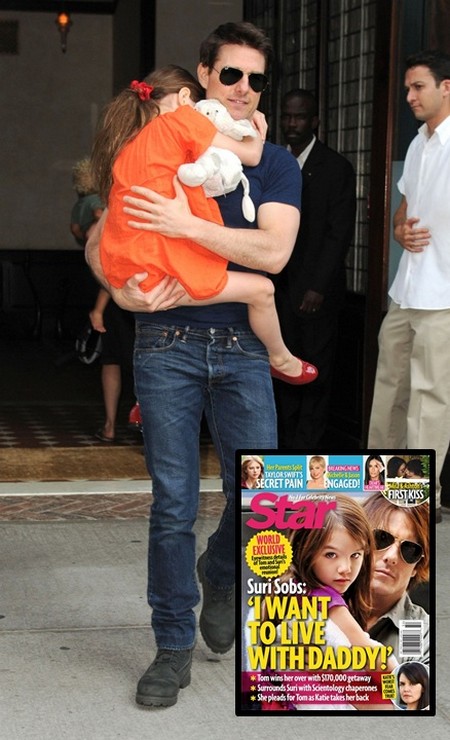 Katie Holmes managed to get daughter Suri back from her estranged husband, Tom Cruise, but only over the child’s plaintive objections. Poor Suri has become a pawn in the bitter divorce battle between Katie and Tom and the child is naturally conflicted. Star Magazine reports on the cover of this week’s issue that eyewitnesses claim that Suri broke into tears when she was finally allowed to visit with her dad last week, sobbing ‘I want to live with daddy!’ Apparently the reunion between father and daughter was an emotional one – Suri loves her daddy and obviously suffers during his absence.

According to Star, Tom won Suri over with a stupendous getaway costing more than $170,000 – the child had such a grand time that she was in no mood to return to mommy! Not that Suri is an easy child to win over with pampering, given how spoiled she seems to be already. But this ‘buying love’ technique is typical in the battles that occur between estranged parents over their children’s love and affection. In this particular war it seems that Tom might be winning.

The most heartbreaking part of the cover is the claim that poor Suri was pleading and crying for Tom as Katie took her forcefully back into custody. Tom had no choice but to relinquish Suri to her mother’s control – his visit was over and he and his daughter were crushed. Katie’s worst fear is coming true – Suri might love her dad more – maybe Katie should have bought her that puppy!

On this week’s Star cover we also learn that Taylor Swift’s parents have split and that she is devastated. Do we care?
Star also promises to go into detail on Demi Moore’s heartbreak over Mila Kunis and Ashton Kutcher’s relationship. Rumors have been circulating that Mila might even be pregnant with Ashton’s child. This will no doubt finish off the fragile Demi once and for all.

To get at the details of these and other hot stories we’ll need to read the Print Edition of this week’s Star Magazine. Stay tuned as we discuss what we discover later this week!