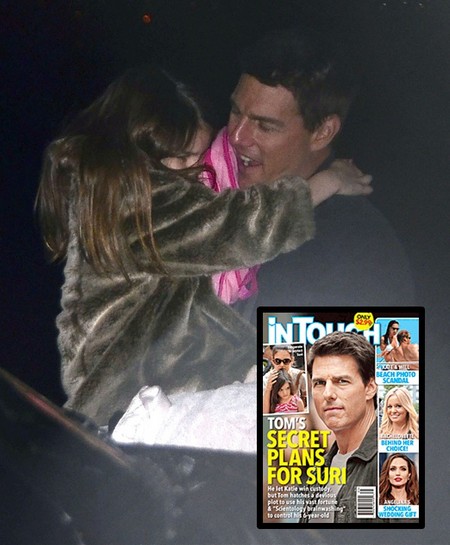 The current issue of InTouch features ‘Tom Cruise’s secret plans for Suri Cruise’, and it’s a shocker! The cover shows a photo of a worn out and much older Tom Cruise, gritting his teeth and staring intently into the camera. The cover quote reads, “He let Katie win custody, but Tom hatches a devious plot to use his vast fortune and Scientology brainwashing to control his 6-year old”.  Oh wow… Is the maniacal Tom ready to unleash his master plan on his daughter and the world?

A quote from InTouch magazine reads, “The shock of Katie Holmes’ divorce filing hit Tom Cruise hard, but the pain of losing his 6-year-old daughter, Suri, absolutely gutted the self-described family man — and left him determined to do something about it. ‘He’s not going to sit back and let Katie win,’ a source who has worked with Tom for years tells In Touch.”

We honestly thought we heard the end of it after  the divorce proceedings ended within a staggering eleven days, but it seems that Tom is not going to lie down and take this beating. He is, after all, a self-described family man.

We know Tom is using Scientology spies to infiltrate wherever he wants them, after they pray for three hours to Xenu, a despotic alien from another planet. What is Tom planning to do? How is he planning to win Suri back?

The poor kid has been through enough as is, so brain control techniques and aversion therapy seem a bit harsh, don’t it Tom?

“Now, Suri, when you see the picture of Katie Holmes, we will immediately show you a picture of genocide afterwards. Don’t stop looking at the flickering screen, little kid…”

Grab the latest copy of InTouch magazine to find out all about the tricks of the manipulation trade.