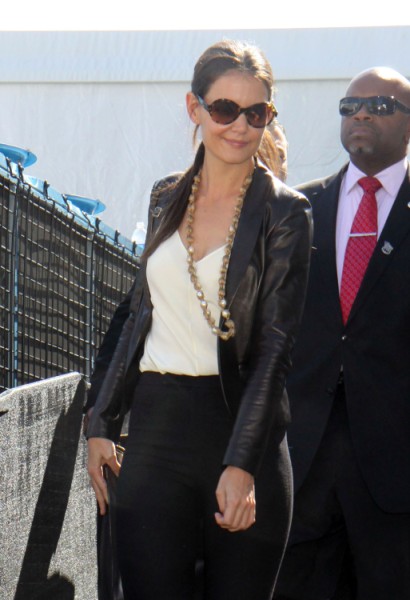 Diane Kruger better watch her man because Katie Holmes is single and ready to mingle.

Katie’s Dawson’s Creek co-star and one-time love, Joshua Jackson, told George Strombolopolous Tonight that Katie recently called him up and they had a blast catching up. “Like any old friend, it was like, ‘Oh, hi how are ya? What’s going on?’ ‘I had a kid’; ‘Yeah, that’s crazy, I heard!’… It was nice, it was very nice, actually.”

Don’t you think it’s strange that Katie Holmes recaps her life with other people as if they don’t watch the news? “I had a kid!” Ya, no sh-t and you married and divorced Tom Cruise. I think I heard something about that somewhere….

So I’m torn. Obviously I’m all Joey Potter and Pacey Witter FOREVER but I have the hugest girl crush on Diane Kruger. She’s perfection and has been dating Josh for the longest time. They are the cutest couple most people have never heard of. Why would Diane Kruger worry about any other woman?? But I know what you’re saying. Katie was just calling to catch up. She wasn’t trying to creep. Fine. But why do you call your ex-boyfriend after ten years? You might know he’s with someone else but there’s probably some digging going on.  “Why aren’t you guys married YET? Just not ready to settle down?” type of digging.

Or maybe Katie is trying to reconnect with everything her life with Tom made her leave behind. That’s equally believable. I’m just saying… Diana Kruger shouldn’t take any long trips. I trust Joshua Jackson but I’m not so sure about Katie Holmes. You don’t live with Tom Cruise for six years without picking up some tricks!

Do you think it was appropriate for Katie Holmes to call ex-boyfriend Joshua Jackson? Katie Holmes’ call was totally innocent RIGHT?