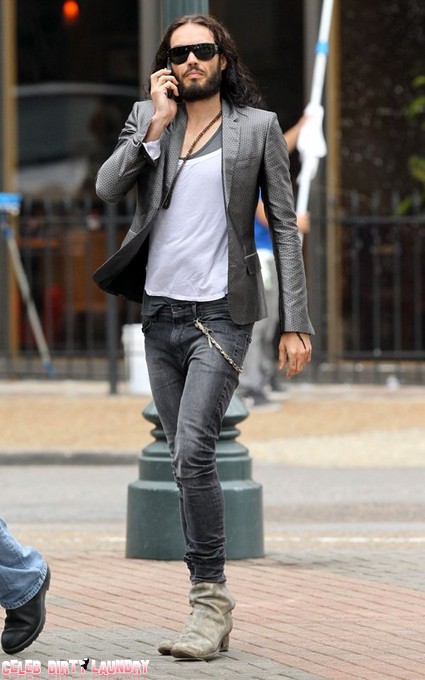 It’s been an eventful 24 hours – even for wild man Russell Brand. There’s been a warrant for his arrest, a trip to the cop shop in New Orleans and now he’s been released on bail. There’s never a dull moment in this crazy guy’s life!

As we reported on Celeb Dirty Laundry yesterday the joker got into a scuffle with a paparazzo on Monday …it ended when he threw the photographer’s iphone through the window of a nearby business. No one was injured but there was a bit of broken glass. Then it got very serious – with an arrest warrant being issued. He was a wanted man! You can check out all the details about what happened here Arrest Warrant Issued For Russell Brand

The British actor and comic turned himself in to the New Orleans Sheriff’s Office on Thursday afternoon. According to TMZ he was booked on two counts of simple criminal damage to property. Both charges are misdemeanors. That’s despite him previously offering to pay for the broken window. Rusty was there for a couple of hours and then posted bail. The bond has been set at $5000. He also faces a $700 fine for criminal damage. There’s no word on if he’ll have to replace the iphone. So he’s a free man again…

There’s been no official comment from Russell who’s in New Orleans filming a new movie. Only the Steve Jobs remarks he made on Twitter after the incident when defending his actions with the phone. I wonder what his ex Katy Perry thinks?