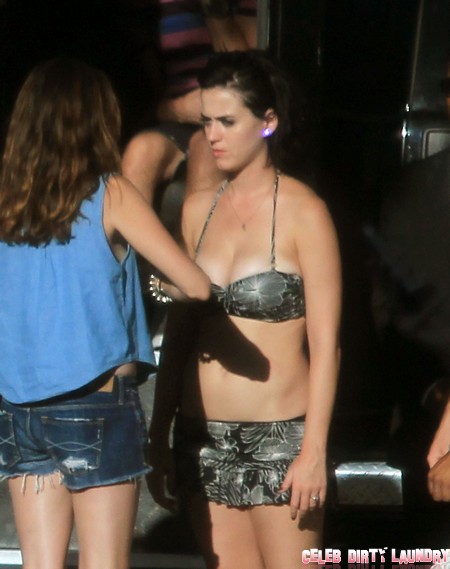 Katy Perry seems to have had the right idea this summer.  She has often been photographed either at the beach or enjoying a great amusement or water park, but yesterday she had quite the wardrobe malfunction.  The singer was trying to surf in the Raging Waters a San Dimas water park but the current was a little rougher than she expected and her bikini bottoms ended up completely off, exposing her perfect rear end.  Luckily for Perry a good friend nearby saw the situation and help readjust her bikini super fast, but some enterprising fan still managed to catch the incident on video anyway.

The singer laughed off the situation and continued playing in the waves.  She had been facing the wall when she tumbled off her boogie board and lost her bottoms and I have to wonder if she would have had the same reaction to the situation had the front of her made it to amateur video!

While very stylish, Katy Perry’s bikini, in truth, didn’t look to be very wave friendly. It was definitely meant to be seen but not played in.  Oh and for the record, John Mayer, Perry’s new fling was not with her at the park.  She was just chilling with her friends.

Do you think Perry was the least bit embarrassed by exposing herself to a bunch of people?  Shouldn’t an admitted beach girl have known she was taking a risk with this bikini? Tell us your thoughts about Perry’s wardrobe malfunction in the comments below!

Singer Katy Perry talks with a group of her friends after spending the afternoon at Raging Waters in San Dimas, California on August 12, 2012. Were Katy and friends laughing off her major bikini malfunction earlier in the park? After riding down a slide on a boogie board, Katy’s bikini bottom got pulled down, exposing her bare butt to everyone watching her get out of the water…