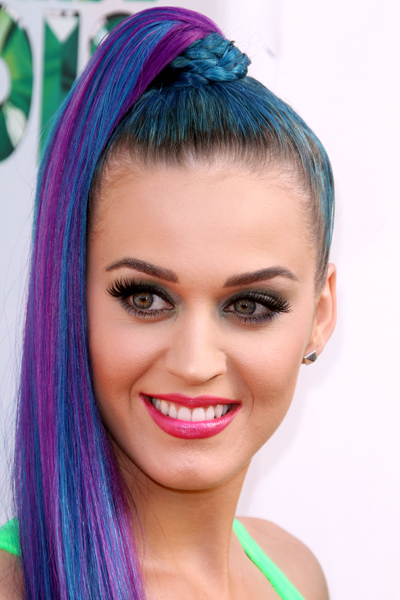 Forget the blue and violet colored hair! Katy Perry is ready for a real makeover, it seems, and she’s not afraid to leverage her assets.

According to the National Enquirer via Celebitchy.com, the 27-year-old pop singer has recruited SNL star and Oscar-nominated Bridesmaids writer Kristen Wiig to help her transition from music to movies. Supposedly, the two have become friends since Katy hosted the late-night show last December.

“Katy is plotting a huge image and career makeover,” said a source to the tabloid. “Coming off a painful divorce from Russell, she wants to start fresh. She feels like she’s reached her full potential as a musician. She is looking for new challenges and is begging Kristen to write a comedy for her.”

Katy’s conventional good looks and already established fan base will no doubt also play a role in convincing Hollywood to give her a shot:

“Even people who don’t know Katy’s music know her from her Proactiv ad campaign,” added the insider. “With her photogenic face, producers are confident she’ll be able to make the jump from the recording studio to the big screen.” Related: Katy Perry Decides ‘Fame Is Disgusting’

And if her first couple of movie roles happen to call for nudity, Katy, evidently, won’t hesitate to drop trou:

“Although Katy is a real-life preacher’s daughter, she’s not shy,” said the source. “She’s never had a problem showing off her ample assets.”

What kind of acting roles do you think Katy should play? Leave us a comment below.