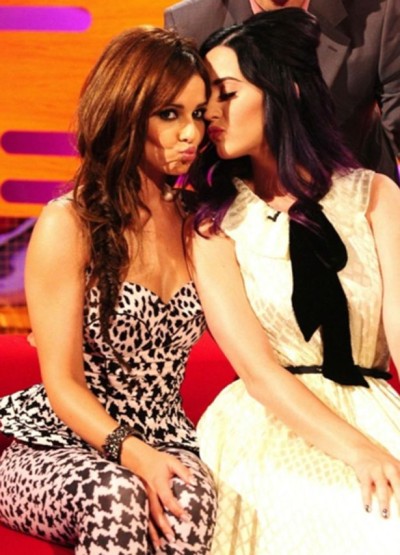 UK’s The Mirror covered the love fest, reporting the girls’ admiration for each other on Twitter. After the smooch, Cheryl tweeted, “I love @katyperry #thatisall” and Katy returned with “Twitter contest. Pick a Geordie to follow on twitter: @realrossnoble or @CherylCole go with your heart. Not just cause Cheryl’s prettier”.

Katy’s in London promoting her new movie, Part Of Me, and even surprised fans earlier in the day by popping in unannounced during a 3D screening. She met up with on-again, off-again boyfriend, Robert Ackroyd, at the end of the night.

But I hope Prince Harry isn’t nursing a sore heart. Word on the street is that the Girls Aloud singer and the prince got pretty friendly backstage at the Queen’s Jubilee concert on Monday night. And Cheryl isn’t keeping her royal relationship fantasies a secret. She told Graham Norton that she “would consider Prince Harry” if he asked her out. Well, who the hell wouldn’t?

I know Harry’s been sounding pretty desperate lately for a partner in crime and maybe leaning on Kate Middleton a little too much to get through the royal functions, but I can’t see Harry with this chick. First, I don’t think Granny would be down with Harry kicking it with an entertainer. Kate’s the only commoner that family’s letting into the firm this generation. Trust. Second, Harry is all about the privacy. He’ll ring this pop star up for a booty call but don’t expect him to marry her. He ditched UK singer, Mollie King, a couple months ago because she couldn’t keep her trap shut about their hook-ups.

That’s why it will be Chelsy Davy FOREVER. She was offered mucho dinero for a tell-all about the ginger Casanova after they broke up but she kept moving with her mouth firmly closed. True, she doesn’t need the money. But Chelsy doesn’t want the attention. But she does want Harry. It’s a royal conundrum!

Do you think Harry should give Cheryl Cole a chance or just have fun with her until Chelsy finally comes around?