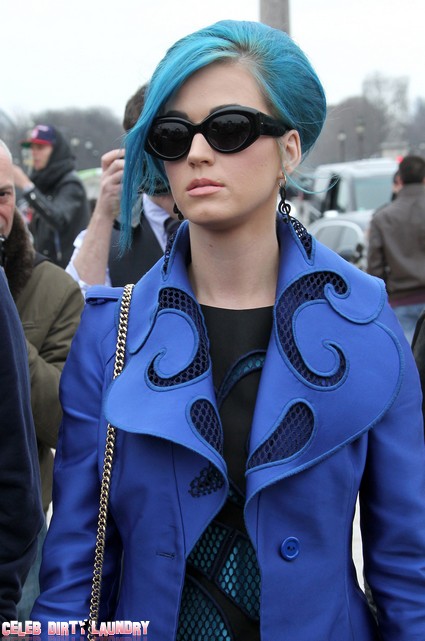 Katy Perry was told to lie and say her new single is about Russell Brand, but she refused. The singer ended her 14-month marriage to the British comedian in December last year, and was horrified when it was suggested her latest track, ‘Part Of Me’, could be a bigger hit if she claimed she had only just written it.  Katy now has the opportunity to branch out in the men’s department…  we meant the man department – hopefully she chooses someone less revolting than Russell for her rebound project.  Of course we know her anti-Semitic parents would like her to date Tim Tebow – as if he needs to part of that mess!

Katy told MTV News:   “I wrote it two years ago, which is funny because everybody is like, ‘God, it sounds so current’.   Some people that I work with were like, ‘You should just say you wrote it a couple of weeks ago’. I’m like, ‘I’m not a douchebag, I’m going to tell the truth’.  I wrote it two years ago when I was writing and recording ‘Teenage Dream’, [but] it didn’t feel right on the record.”

Katy recently admitted her third album is going to get “real f***ing dark” and her lyrics will be more introspective than her previous records.

She added:   “Well, my music is about get real f***ing dark. I’ll be shoe-gazing. You’ll never see my face because my hair is in my face.”

Katy is either playing the dark wounded one or the wild party girl – why can’t she just be herself?  Of course what is her real character and personality?  The fact that Katy married Russell makes me wonder if she is ‘all there.’  Russell is an admitted sex addict and heroin junkie who claims to have turned his life around with the help of yoga and meditation – sounds like the late George Harrison.  But given their whirlwind romance and sudden divorce you have to ask if Katy is all that stable herself.

What do you think?  Are we just picking on Katy just because her parents are anti-Semitic religious wackos?   Or is Katy just a silly flake?  Let us know in the comments below.