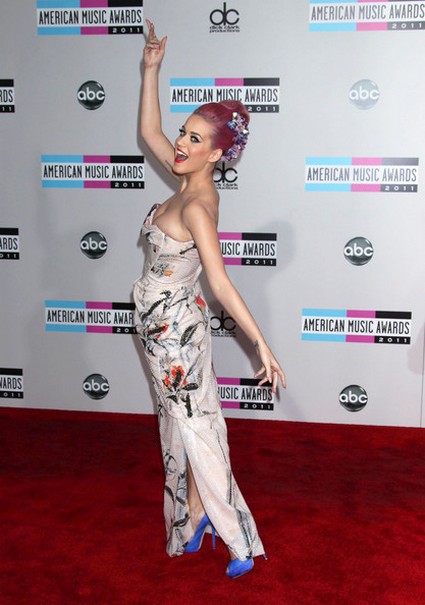 Katy Perry wants to make a man swap from the self-admitted sex maniac and former junkie Russell Brand, to the current American icon of purity, Tim Tebow. What’s even better is that Katy’s fanatically religious parents, Mary and Keith Hudson, are pushing for the match. Can you see the Denver Broncos star quarterback in his trademark ‘Tebowing’ one-knee prayer pose while proposing to party-girl Katy? No, neither can I.

One of the reasons Russell dumped Katy was because she just wouldn’t stop partying and grow up. Russell as a recovering addict could not handle the fact that Katy just wouldn’t settle down and insisted on doing the Hollywood party scene.

Regardless of the remote prospect of a man like Tebow going anywhere near damaged goods like Katy, her sicko parents took time off from delivering anti-Semitic rants to express hope that Tebow could help heal their daughter’s broken heart.

The New York Post reports that Katy’s parents want her to date the religious NFL star and that Katy herself is keen on the deal.

According to a source for the New York Post: “Katy’s mentioned on more than one occasion how much she likes Tim.”

“Katy’s mom firmly believes the best cure for heartache is to quickly fall in love again. In her mind, Tebow is the perfect guy for her daughter. He’s handsome, charming, intelligent and above all, a good Christian.”

Religion was an issue that contributed to Russell filing for divorce after just 14 months of marriage – he is not a Christian (Russell claims to be a Buddhist) and apparently ridiculed the over-the-top religiosity of Katy’s parents.

Last year, Katy said: “Russell has made very blasphemous jokes in the past, but he’s making fewer all the time because he knows that I am very sensitive about this subject.”

I guess Russell can get back to making all the jokes he likes now.