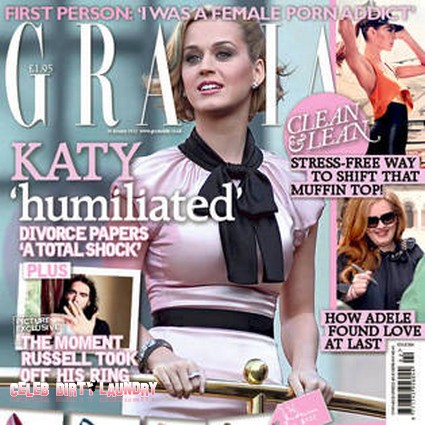 Katy Perry is considering flying to the UK for a major confrontation with Russell Brand, according to Grazia magazine.  Katy is said to have been “crushed” when Russell announced at the end of last month that he was filing for divorce after just over a year of marriage. Friends say Katy still hasn’t given up hope that she and Russell can resolve their problems and possibly reconcile.

A source told Grazia magazine: “Katy was absolutely crushed by Russell’s decision. She’s furious after everything he’s done, but still insists there must be a way to reconcile and try to work things out.”

“She told Russell that if he’d agreed to marriage counselling, they wouldn’t be in this mess and tried to persuade him to fly back to the States and meet her.”

“She’s now considering jetting to the UK as she’s desperate to see him and talk to him. She said she can’t stand that everything has been done over the phone and says she needs to see him before she can truly accept it’s over.”

Speculation the couple’s marriage was in trouble emerged after it was revealed the pair were spending the holiday season apart, and friends say they agreed to do so in a bid to figure out if they wanted to save their relationship after a string of bitter battles. Katy Katy was shocked when Russell suddenly announced they were separating and filed for divorce.

One insider told LOOK magazine: “Katy and Russell were both clearly sick of fighting, so they agreed to spend the whole festive period apart to figure out what they really wanted. So Russell went back to the UK and Katy flew 7,000 miles in the opposite direction to Hawaii with friends.”

“The next thing Katy knows, Russell’s filed for divorce. I think she was still trying to figure out what was going on.”

If Katy and Russell get back together it will be bigger news than when they split. Especially since, as we at Celeb Dirty Laundry reported, Russell is rumored to be bored with Katy sexually. How will the couple reconcile? Will they try threesomes the way Demi Moore and Ashton Kutcher were rumored to have done?  We have all seen how well that worked out… . Let us know your opinion below in the comments.