Keeping Up With The Kardashians Recap 7/9/12: Season 7 Episode 9 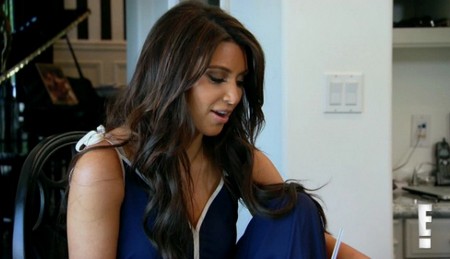 Tonight on E! is an all new episode of Keeping Up With The Karadshians. On tonight’s part two of this two part story, Kanye West make his debut on the show. If you missed last night’s show called “Sometimes You Need To Adjust”, we have a full and detailed recap for you here.

In last night’s episode Khloe returned to LA to face increasing demands on her time from the family. “I literally just got back to L.A. and I’m being asked to go to New York for Scott’s restaurant opening,” Khloé explained. “But what my family doesn’t get is I’m going through a million different emotions in my head.”

In part 2 of the show which airs tomorrow we get to see Kanye West make his debut on Keeping Up with The Kardashians. Kim is reluctant to talk about her relationship with Kanye West; Khloe continues to feel pressure from her family and must decide whether to return to New York to attend the opening of Scott’s restaurant.

In a preview clip for the episode, Kim and Kourtney receive a call from their brother.  He can’t wait to ask Kim about the Kanye West’s new single Cold which includes one line dedicated to Kim.  Kim fakes it and makes like it is no big deal.

Tonight’s recap: The episode starts with Kim is doing the red carpet for Dress for Success and ends up having flour dumped all over her head. She refuses to let the evening be wasted by an anti-fur organization so she cleans up and heads back to the red carpet. Scott is in NYC freaking out because he thought his restaurant opening was on schedule, until he walked through the front door. It’s still a mess and Scott is afraid to let Kourtney down.

Now we get to the much anticipated questions about Kanye. Rob and Kourtney are both on the phone grilling Kim about Kanye and she is playing the friend card, but they’re not buying it. Khloe is still irritated with her family for badgering her about coming to NYC for Scott’s restaurant opening. She and Lamar have just returned to LA and the last thing she wants to do is board another plane for anywhere.

Kim loves her uber-expensive cars and Kanye has a nice one that she has decided to borrow. She decides to take poor, pregnant Kourtney for a ride. They go back to Kourtney’s house and discover Khloe waiting. They discuss how hard it is to be apart. Khloe apologizes for making her sisters feel unimportant and tells them that even Lamar wants to go to NY with the family.

The entire family arrives in NYC but no one can find Scott.  That’s probably because he is avoiding them all in favor of partying with his friends!  The family starts pressing Kim for information on Kanye.  Kris says Kim and Kanye have been friends for years but as far as a relationship goes, the timing was always off until now.  Kim reassures everyone that they are taking things very slow.

Scott is dodging the family still, with the exception of Rob, who is his partying partner in crime here.  Scott admits he still has yet to even talk to Kourtney since she arrived in town.  Pretty pathetic considering she is very pregnant and carting their two year old son with her.   Kourtney admits that she always wants to break up with Scott and isn’t sure how much she hates him.

The family starts to rag on Scott for mistreating Kourtney and he doesn’t seem to care.  As usual he defends his bad behavior.  Kim suspects that the restaurant isn’t even going to open.  Kourtney leaves and the family continues discussing Scott and how badly he treats Kourtney.  Meanwhile in the next room Scott tells Kourtney flat out that she is very emotional and just way too hard to be around.

The whole family eventually warns Scott that if he doesn’t grow up and treat his pregnant girlfriend better, she’s not going to be his girlfriend for long.

Kim has lunch with Khloe and Kris and they are trying to figure out if Kanye is officially her boyfriend.  Kim trying to play coy is like Kim pretending to be a scientist.  It just doesn’t work.  Kanye is supposedly coming to Scott’s restaurant opening.  She doesn’t want to make a big fuss about it but when he appears in her hotel room it’s typical Kim, calling him “babe” every two minutes.

Scott’s is a nervous wreck at his restaurant opening.  He admits to being stressed and overwhelmed. The family is totally supportive and think that Scott did an amazing job on everything.  He is thrilled to have built something on his own.

As Kim and Kanye sit together canoodling it is very clear that they are some sort of couple.  Tune in next week to see more of the new couple.