Keeping Up With The Kardashians Recap: Season 7 Premiere 5/20/12

BY Dorothy Gale on May 20, 2012 | Comments: 3 comments
Related : Keeping Up With The Kardashians, Kim Kardashian, Kris Jenner, Reality TV, Recap 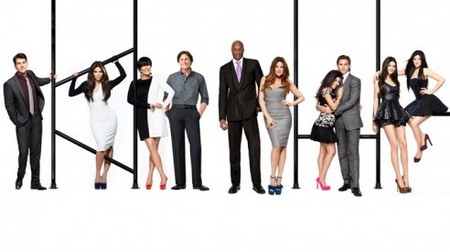 Tonight the season 7 premiere of Keeping Up With The Kardashians airs on E! Stand by as we live blog the episode with all the up-to-the-minute details.

Kris Jenner wrote about tonight’s episode ‘So excited for season 7 of Keeping Up with the Kardashians to premiere tonight! This season is our best yet! Love, laughter, tears, fights, makeups and all of the usual craziness that goes on in our family.’ I guess she is excited, reportedly the family is getting a whopping $40 million dollars and momanager Kim collects 10% of that.

In the season opener, Kris is fed up with all those rumours about Khloe’s father not really being her daddy (you know cause she looks nothing like him and all like O.J. Simpson, I’m just saying) and Kourtney pisses off Kim when she gets all bossy about relocating their Dash store. Now just to add a little excitement to this episode, Papa K goes to extreme measures just to get his families attention.  Bruce Jenner seems to think that he is being taken advantage of and this causes a bumpy road in his relationship with “momager” Kris Jenner.

We will be live blogging the episode with all the up-to-the-minute details at 9PM EST so make sure to come back to this spot and watch the show with us.   Make sure to refresh often so you get the most current info!  While you wait for the episode you can catch a sneak peek of tonight’s episode and some SPOILERS here!

RECAP: At the Jenner house, Kourtney is so excited because Khloe is in town. Kourtney is claiming about her pregnancy body. Ever since Kourtney moved to Dallas, she misses her family. At dinner, Scott tells the family that the last time he had sex is when Kourtney got pregnant.

Everyone has left the house and Kris is surprised to see Bruce upstairs watching TV, she gives him a piece of his mind because he didn’t join them for dinner. Bruce is ticked off and decides that he is going to sleep downstairs with the dogs.

The next day, Kris is upset because everyone is accusing her of not being faithful when she was pregnant with Khloe which resulted in her husband not being her father. She is very upset about it and wants Khloe to have a DNA test to put this once and for all to bed and give them peace. Khloe will have nothing to do with it and insists she doesn’t need to prove anything.

Kris is in the car and calls a specialist that deals with DNA. She asks him what does she have to do to prove the paternity of one of her children, basically without their consent. He explains that it requires a cheek swab from either the parents and the child, or the child and three of their siblings.

Bruce is at home and is upset that he is forgotten at home. Meanwhile, the Dash lease is up in a month and the girls have to meet to find a new one. Kourtney shows up, but all alone.

Later on, Kris meets with the children and discusses the fact that Khloe is being tortured about who her father is and wants their help to find out. She tells them that she needs to get their mouths swabbed, Kourtney is against it because it is behind Khloe’s back. In the end, everyone agrees, as long as Kris is going to tell Kourtney.

When the guy arrives to do the DNA, Bruce tells Kris that she is bending to the tabloids. Two down, two to go, Rob is next to get the test and then Kris has to figure out what she is going to do about Khloe.

Rob is going to Europe for his show line, but first he is going to look for a home with his mother and Kim. Kris approaches Rob and asks if he will do the test to get rid of this issue for once and for all.

Later that night, Khloe calls the house and Bruce answers, he tells her that he doesn’t know where any one is and it’s almost like he doesn’t even live there.

Kris has been renovating their new offices for months and finally shows it off to Kourtney and Kim. Kourtney gets a text message about the Dash location and Kim is surprised that she has taken this on by herself. Kim is really ticked off because it seems like Kourtney’s schedule is the only one that matters, she can’t wait for Kim and Khloe.

Kris gets home and finds Bruce eating chips on the brand new couch and his drink on the brand new table. She totally freaks out on him, which drives him crazy, he tells her that he almost feels like he’s not wanted there any more.

Bruce has had enough, while Khloe is in Dallas, he is moving into her house. He moves into Rob’s old bedroom and makes himself at home. Scott calls Bruce, he tells Scott that he left the house and moved into Khloe’s. Some time later, Scott shows up and finds Bruce watching the basketball game, he tells Scott that it’s a test to see if anyone misses him. Scott and Bruce find they have something in common, neither is getting any and sleep in different rooms than their wives.

Kim goes with Kourtney to see the space that she has picked out and Kim does not like it and thinks there would have to be too much work.

At Khloe’s house, Bruce and Scott play a game of pool. Bruce gets Scott to call the house and ask for Bruce, Kris tells him she has no idea where he is and will have him call him back later. Scott tries to give Bruce advice to go home, but he doesn’t want to for now.

Kourtney does all the buying for the Dash store, Kris arrives there and asks where Kim is but Kourtney tells her that she doesn’t like to do this sort of thing and that’s why she’s not there. Kris tells Kourtney that she is being a control freak and needs to call her sister.

Bruce goes back home, his experiment didn’t work. He arrives to see Kris and she didn’t even realize that he was gone for two days and he is sick and tired of it. Kris comes out in full attack and tells him that respect is earned and although he wants to be included, then he needs to put himself in the front of the family and act like he cares.

Khloe and Kim meet Kourtney at the new potential location; the two agree with her and Kim tells her that she is going to make herself more available in the future.

Kris is having a family dinner, everybody is going to be there. Bruce wants to know if Kourntey is having a boy or girl, it’s a girl and Kourtney is thrilled that Mason won’t have to compete with another boy. Kris warns everyone that she is going to approach Khloe about the DNA tonight.

After dinner, Kris tells Khloe about the DNA, Bruce interrupts and tells her it’s stupid, while Khloe blames Kris for this whole thing. Khloe goes on to tell Kris that she doesn’t care while the doorbell rings and the doctor arrives to do the DNA. Bruce sarcastically claps and congratulates Kris on a job well done. Khloe walks out of the room, she is pissed that she was ambushed. Kourtney and Kim try to talk to Khloe and convince her to just do it, but Khloe won’t because this is not something she wants, it’s what Kris wants.

The next day, Kris is at lunch with Kim and tells her that she is really stressed out by this whole thing with Khloe. Kim just tells her straight, that she is coming off the wrong way with Khloe and really, she just wants this for herself. Kris arrives home and Bruce is upset that Kendall and Kylie are texting and are ignoring him. Bruce takes control, he takes their cell phones and tells them they are going for a drive. They all go for ice cream and Kylie opens up that she is having problems in science that is making her really upset. Bruce is thrilled, they are communicating, he gives the girls their cell phones tells them they can leave.

Kris wrote Khloe a letter because she is nervous to talk to her, Khloe takes the letter and tosses it, tells her that she doesn’t care about it. Kris gets upset and demands respect for Khloe to at least read the letter, Khloe tells her to relax and go have a glass of wine.

Kris leaves Khloe’s house which leaves Khloe alone with the letter and she reads it. Khloe is so touched by letter that she goes to visit her mom and hugs her, but tells her that she has to respect her. Kris agrees to forget about it because she is tired of fighting this fight.