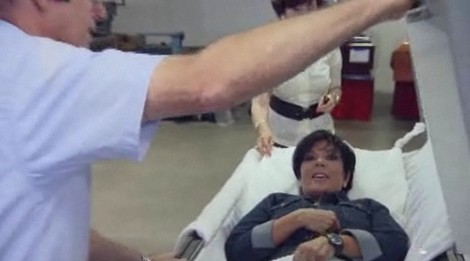 Tonight on E! is an all new episode of Keeping Up With The Karadshians called “Tales From The Kardashian Crypt”. On tonight’s show Kim and Khloe buy Mason a fish and Kris tells the family that she wants to plan her funeral. If you missed the last show called “Parent Trap”, we have a full and detailed recap for you here.

On tonight’s show Kris wants to get the family together, forever.  She asks Bruce if he wants to be cremated  or does he want to be buried.  Bruce does not want to talk about it and tells her he does not care.  Kris, tells Bruce and the family they have to make the right decision.  Kim, the genius, says what is the right decision, you get in the coffin, you get in the ground.  What do you have to do?

Kim tries to makes arrangements for their funerals, saying and this could be Kim and this could be Rob and Rob comments, “it is like she is planning a party.”   Kris gets the family to the coffin place and she hops in the coffin and asks if there is anyway she can take a spin.  Bruce tells her she has lost her mind!  Creepy….The more I see this women, the more repulsive she gets, ughh….

Tonight is going to be another crazy episode that you won’t want to miss, so be sure to tune in for our live coverage of E!’s “Keeping Up With The Kardashians” tonight at 9PM EST! Meanwhile, while you wait for our recap hit the comments and let us know what you think of season 7 of “Keeping Up With The Kardashians”, so far! Check out the sneak peek video of tonight’s show below!

Tonight’s episode: Kim wants to get Mason a present for when his little sister is born.

Kris calls her mom and wants to know if there is plot next to her father where his ashes are lain.

Kim goes over to see Mason, she brings him a fish and he is really excited, but Kourtney and Scott don’t look impressed. Kourtney is not a pet person and she did not want pets until her children were old enough to ask for them himselves. Mason is thrilled, but it’s not Kourtney’s dream come true. Mason names the fishes Fruity and Pebbles.

Kris approaches Bruce and tells him that some of the worse things her mom went through was when her mom died and the last thing she wants is for her children to go through the same thing. Kris wants to get a mausoleum, Bruce has no interest in the topic and tells her to do whatever she wants to do.

Khloe is playing with Mason and she notices that one of the fish is dead. Khloe flushes the fish down the toilet – she needs to replace Pebbles and this is exactly why Kourtney didn’t want him to have a pet.

Kris calls all the family over to discuss what they would ever do if somebody passed away. Kim doesn’t understand why they have to talk about it, you die, you go in the ground, what’s the big deal. Khloe and Rob started making jokes and laugh about it.

Kourtney heads to the pet shop with Kim and Khloe, they get a replacement fish and Kourtney decides to get an aquarium so the fishes don’t die anymore.

At home, the girls put the aquarium together, much to Mason’s delight.

Kris, together with Bruce, heads to a cemetery to find out about options for her family. Rob walks in and really thinks the idea is ridiculous and is weirded out when it appears more like Kris is planning a party. Khloe then arrives and she doesn’t find there is any fun in being there. They take a tour of the grounds and Kim is also there. Kim and Khloe have more interest in the ducks on the lawn than they do in being at a cemetery.

Kourtney calls Kim, another fish dies and she just can’t deal with it, Kim assures her that she will replace the fish. Bruce is with Kim and tells her that they should just be honest with Mason and tell him the fish died.

Kris has now dragged the kids to look at caskets; she wants a black shiny one for herself like a baby grand piano with pearls. Kris acts really morbid, she asks if she can test drive one of the caskets and the kids are really shocked and uncomfortable when she climbs on a footstool and gets in.

Kris asks Kim, who does she think Kourtney has chosen to take care of Mason if something happens to her and Scott, she doesn’t know. Kris calls Kourtney; she tells them that it is not either of them, it’s Khloe and it’s her decision that she took very seriously. Kim is offended, she can’t believe that Kourtney choose Khloe over her.

Bruce goes over to see Kourtney and they start talking about the fish. Kourtney shares her frustration about replacing the dead fish, Bruce tells her to be realistic with Mason and he even brought her a book to read to Mason about it.

Kim is with Khloe in her show closet and is shocked that Khloe has some shoes in every color. Kim tells Khloe that she knows she is Mason’s guardian. Kim thinks she spends more time with Mason and therefore feels she is more deserving of being the guardian.

Scott is surprised that Kourtney got rid of the aquarium, but even so, Mason didn’t even notice. Khloe asks Kourtney why she told Kris and Kim about her being the guardian, Kourtney explains that Kris kind of forced her into it.

Kris sends Kourtney and Rob a bunch of flowers, she wants them to decide which flowers they want at their funeral and the whole situation is really getting to Rob.

Khloe and Rob are at lunch with Kris when Rob first calls his mother an alcoholic for drinking vodka at lunch, Kris claims she drinks it because it is lower in calories. Khloe and Rob then tell Kris they do not like the whole talk about the cemetery and the mausoleum, she has made them feel really uncomfortable.

Kim is alone with Kourtney, she asks her right out why she didn’t even have a conversation with her before she made her decision about the guardian. Kourtney claims that Kim is just too busy and that is why she didn’t choose her.

The next day, Kourtney goes to see Kim and tells her that she had to pick one person and it doesn’t mean that she’s not a great aunt. The responsibility Kourtney wanted to give to Kim is the financial responsibility for her children.

The family gets together to celebrate Kim and her life, Rob reveals that he got a tattoo on his arm of his mom and she is delighted.