BY Dorothy Gale on July 29, 2012 | Comments: one comment
Related : Keeping Up With The Kardashians, Reality TV, Recap 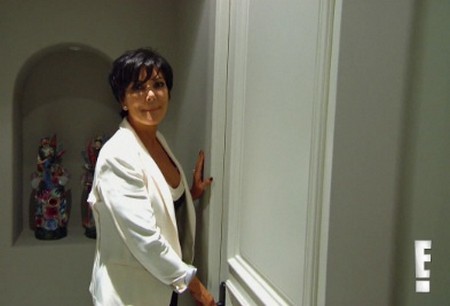 Tonight on E! is an all new episode of Keeping Up With The Karadshians called “Parent Trap”. On tonight’s show the kids force Bruce and Kris to work out their differences. If you missed last week’s show called “Affairs Of The Everhart”, we have a full and detailed recap for you here.

On last week’s episode Bruce found a new golf partner in Angie Everhart. Bruce said he loved playing golf with women because the man always beat up on each other but women are more civilized and they are more pleasing to look at. Angie and Bruce do a lot of flirting and at one point Bruce said he was in heaven.

Kris became uber jealous of Angie and trouble was brewing in the house. Rob moved back in with Khloe and Lamar, and the siblings began to squabble.

On tonight’s show Kris Jenner is stunned that Bruce is not understanding about her secret meet up with former flame Todd Waterman. Bruce is not pleased and calls his wife unkind names as she tries to explain why meeting with Todd Waterman has given her a new perspective on him and, it should be good news for Bruce. LOL she is truly disillusion!

Perhaps Bruce was unhappy because she dragged him out of bed to tell him her secret.   Bruce asks Kris to explain why she had to see the a**h*** (Todd)?  Then Kris actually tells Bruce she may have been fantasizing about someone for the past 25 years..  WOW, what a nice thing to say to her hubby.  Hopefully Bruce wakes up one day and kicks her sorry butt to the curb!

RECAP: Kris is still with Todd, she feels like there have been a lot of things left unsaid and needs get them off her chest before she can move on. Todd wants to leave the restaurant, but first he wants to get her drunk and tries to order shots. Kris refuses shots, she wants to talk about the past and Todd doesn’t want to. Kris feels like the dinner has taught her a lot of things and she is happy to go home to Bruce.

Kris is at home, she wants to speak to Bruce and tell him what happened. Kris tells Bruce that she met with Todd and may have been fantasizing about someone for 23 years that wasn’t worth it (meaning Todd). Bruce calls her an idiot and tells her he doesn’t know if he can trust her any more.

At Khloe and Lamar’s house, Kim is going through her clothes trying to help her; but Khloe finds it is too stressful with her there. Lamar comes in to say bye to Kim and she feels that he has a cavity, she has a sixth sense about it.

At the office, Kris asks Kourtney to leave the room, she wants to speak to Kim and Khloe alone. Kourtney doesn’t leave, then Kris tells them she met with Todd. Kourtney calls her a whore, Kris claims she did it for closure. Kim wants her to take a lie detector test because she honestly doesn’t believe anything her mom says. Kourtney asks Kris if she touched Todd’s p*nis under the table with her foot.

Kim is shocked that Lamar has still not gone to the dentist, she tells Khloe that Lamar’s breath makes her throw up in her mouth, she knows he has a cavity.

Kim has found a guy to do the lie detector test, he gives the girls tips on what kind of questions to come up with.

Lamar is terrified to go to the dentist and Kim has made it her mission to get him to go. Kim makes the appointment and Lamar agrees to go.

By the pool, Kourtney asks Bruce how he feels about Kris meeting with Todd. He tells her and her sisters that he doesn’t like it and just after he married Kris, she told him to never trust her. Kim tells Bruce about the lie detector test, but he doesn’t trust them.

Kris feels like doing a lie detector test is over the top shady, but she is willing to do it if it will make everyone happy.

Kim and her sisters have come up with a list of questions, they are anxious to find out the truth. Here are the questions and answers.

Is Kim your favourite daughter? Yes.

Have you ever taken more than your cut from your daughter’s deals? No.

Do you regret having an after on Robert Kardashian? Yes.

Are you in love with Todd Waterman? No.

Would you like to have an affair with Todd? No. At this point the machine goes crazy and Bruce walks out of the room.

Kris passes the lie detector test, or so she thinks so, but Bruce saw the needle go crazy on the machine when he asked if she wanted an affair with Todd. Bruce wants to know why she went to go see Todd in the first place, he is not happy about the whole thing, he calls it ridiculous.

Lamar is done at the dentist, they did a lot of work including a root canal, he feels so much better.Kim got him to go to the dentist and Khloe is so thankful.

Bruce goes to see his son at the beach and tells him what happened with Kris. His son asks him if he has ever thought of separating from Kris, Bruce tells him not really but it has never been as bad as it is right now.

Kim bugs Rob about his hair thinning out and it really bugs him. The next day, Rob heads to a store with Scott to find something to prevent hair loss.

Khloe and her sisters plan to force Bruce and Kris to rekindle their spark.

Rob did some research about hair loss and he goes over to his moms to find out if his grandfather had a lot of hair, he wants to know if it’s genetic.

At Kim’s house, everyone is over for a BBQ. Kris tries to start conversation with Bruce and he’s not really open to it. Kim tells her parents that they have planned a magical weekend in Malibu for the two, Kim says right away that she has things to do at home. The kids have packed the car already, there is nothing for Kris and Bruce to do but get in the car and go.

Rob goes to see a hair loss specialist who tells him that he is in fact losing his hair. Khloe finds these gadgets that Rob bought to help his hair get fuller and laughs at them, he finds it hurtful.

Kris and Bruce arrive in Malibu and Bruce is wondering what they are going to do for two days. Kris goes outside, while Bruce goes to check out the tv. Night one of their romantic getaway doesn’t seem so successful, Bruce has fallen asleep on the couch and Kris sleeps alone in the big bed.

The next morning, Kris is making coffee and when Bruce tries to tell her what to do, she tells him to stop being nasty and walks away.

At Khloe’s house, Lamar tells Rob about when he was starting to go bald but he tells him he was lucky, at the time, when he was 19, Michael Jordan made being bald cool, so he shaved his head.

Rob feels better after his conversation with Lamar, he tells him that his sisters were giving him a complex.

Kim left a book of photos for Kris and Bruce to look over and it reminds Kris of what a great life they have had together. Kris tells Bruce that they used to put their relationship first, that is the difference. Bruce agrees with Kris and they toast over it.