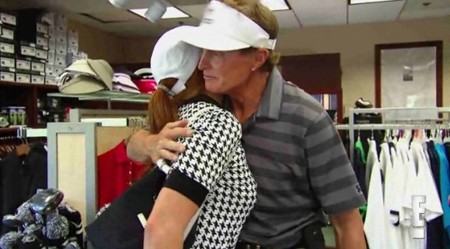 Tonight on E! is an all new episode of Keeping Up With The Karadshians called “Affairs Of The Everhart”. While Bruce finds a golf buddy in supermodel Angie Everhart, Kris wonders if she should call up an old ‘buddy’ of her own. If you missed last week’s show called “Kim’s Man Calls, Kourtney’s Man Falls”, we have a full and detailed recap for you here.

On last week’s episode Kim was off to London with her new boyfriend Kanye West. Kim also brought Jonathan along on the trip and he wanted to go on the London Eye. But Kim though it would take too long, but Jonathan assured her they will speed the Ferris wheel up for her.  Kim is headed out to launch her new fragrance with Jonathan.   Kim made a point to work hard and play hard–but apparently her friend Jonathan wasn’t keen on her interpretation of fun.

On tonight’s show Bruce finds a new golf partner in Angie Everhart.  Bruce says he loves playing golf with women because the man always beat up on each other but women are more civilized and they are more pleasing to look at.  Angie and Bruce do a lot of flirting and at one point Bruce says he is in heaven.

Trouble may be brewing in the Jenner household when Kris gets jealous of Angie.  Meanwhile, Rob moves back in with Khloe and Lamar, and the siblings begin to squabble.

Here we go with the Live Recap!!

Tonight’s episode begins with the family sitting down to eat with Kris’ good friend, Lance Bass. Bruce had to be persuaded to join them because he just assumed that Kris wouldn’t want him there. Khloe points out that Kris and Bruce are always seated far apart at the table and the kids joke that it’s because there are no sparks left between the couple.

Rob goes house hunting with Scott but soon realizes that he can’t afford to buy the place that he wants. He asks his realtor not to share this detail with the family and then calls Lamar. Rob hopes that maybe he can move back in with Khloe and Lamar for awhile until he’s in a position to buy. Khloe is afraid that he’ll begin taking advantage of them all over again.

Bruce is taking part in a golf tournament and realizes old friend, ex-model, Angie ever hart is playing as well. They rekindle their friendship and she agrees to play a game with him. Bruce happily tells Kris and she is none too happy. Bruce then calls and actually sets up that golf date with Angie!

Bruce tells Khloe not to allow Rob to come back.  Bruce says he has more than enough money to get an apartment. Kris asks Bruce to pick up her dress at the cleaners and he informs her that he can’t because he has a t-time with Angie.  Kris gets snippy and he agrees to make time for the dress, then he goes to meet Angie.  Bruce later says he loves playing with her, she’s a great looking lady and the conversation is good. Let me say, the sparks missing between Bruce and Kris do exist between Bruce and Angie. Adding insult to injury, Bruce actually forgot Kris’ dry cleaning which sent her through the roof!

Khloe expected Rob to put everything but his clothes into storage.  Unfortunately the storage unit looks like it’s going to be Khloe’s garage.  Needless to say she’s flipping. Kris is jealous about Bruce’s golfing with Angie.  She talks to Kim and Kim suggests that they spy on their next golf game to put her mind at ease.

Rob is living with Khloe and Lamar for one day and already he is disrespecting Khloe.  She rightly feels like she let negativity into her house by letting him through the door.

Kim and Kris dress up in their best black, incognito sweatsuits and head off to spy on Bruce and Angie.  They spot them on the green and Kris is furious. Bruce had his arm around Angie and it’s hard for her to watch him have chemistry with anyone else.  Kris meets up with her friends and tells them that if Bruce an be with Angie then maybe she needs to see Todd (you know, the guy that helped break up her marriage to Robert Kardashian?) to take care of unfinished business.

Bruce admits that he loves spending time with Angie simply because she’s a pretty woman that doesn’t yell at him.

Rob decides to level with Khloe and explain his own disappointment in his finances and how that is what has brought him back to her and Lamar.  She is, of course, super understanding and devises a plan to help her brother save money each month to be able to buy his house within a year.

In a shocking move, Kris decides to call and meet Todd for a drink while Bruce is once again golfing with Angie.  Kris starts reminiscing with Todd and we’ll have to watch next week for details!